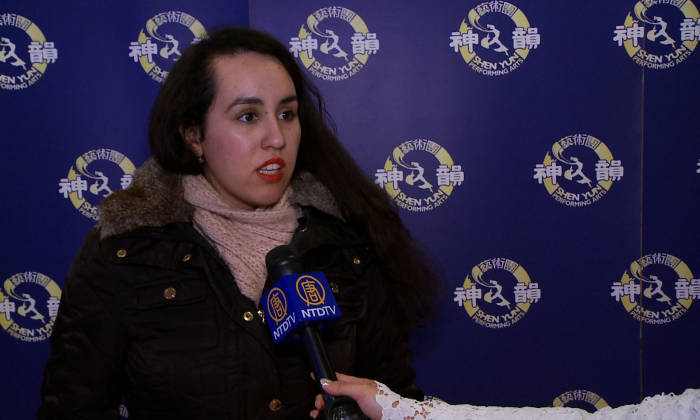 Writer and editor Tanya Cruz shares her thoughts on Shen Yun after attending the performance at the Sony Centre for the Performing Arts in Toronto on opening night, Jan. 21, 2015. (NTD Television)
Arts & Culture

Writer: Shen Yun Reminds Us of Traditional Values and Family

TORONTO—Writer Tanya Cruz wasted no time sharing Shen Yun Performing Arts with her friends, posting a photo of herself and her mother at Sony Centre on Instagram right after the opening night performance.

“I thought it was so good. This is the first time I have seen it. I came with my mom,” said Ms. Cruz after seeing the renowned classical Chinese dance and music production Wednesday night.

“I got it as a Christmas present and it was so beautiful. The performances, the costumes were so vibrant. The music—it was all so gorgeous,” she added.

As a freelance writer and editor, Ms. Cruz specializes in lifestyle content and topics such as women, parenting, and health. Her work can be found on a number of different websites of online companies and communities such as The Baby Post, 29Secrets.com, and urbanmoms.ca.

New York-based Shen Yun was founded in 2006 and has the mission of reviving the authentic 5,000-year-old traditional culture of China, believed by the ancients to be divinely inspired.

The company tours the world each year with an all-new production of classical Chinese dance rounded out with Chinese folk dance and ethnic dance, including story-based pieces that share with the audience some of the many spectacular myths and legends of the Middle Kingdom.

It was something very new and different for Ms. Cruz, and she noted that for her the music was not only entertaining but also uplifting.

“It’s so light, so fun, stress-free, and you are just having a great time. It’s just so positive; it was great,” she said.

“It’s so, so good,” she added. “It’s not something you see everyday, so just to see it live, you get to appreciate it so much.”

From the perspective of a writer, Ms. Cruz said that she very much enjoyed the way the stories and legends were presented.

“I thought it was very well presented. Everything came together—the dance, the costumes, even the animation in the back—it was all so cohesive,” she said, also praising the state-of-the-art digitally animated backdrop of Shen Yun.

The stories bring to life those virtues and principles that are the essence of traditional Chinese culture, a very spiritual and moral culture—ideals such as benevolence and justice, courage and wisdom, and reverence for the divine.

These values behind the stories resonated with Ms. Cruz, such as compassion, honesty, and friendship, she said.

“You saw that through the dance and the way they were telling the stories. It was weaved into everything. I thought it was really well done,” she said.

“Especially with all of the things happening in the world right now, I think it’s nice to be reminded of these traditional values and family. I think it’s great,” she added.

She noted that she would definitely recommend Shen Yun.

“It’s a great show to take family and friends, everyone. It’s a great cultural experience to get to see such a vibrant Chinese culture,” she said.