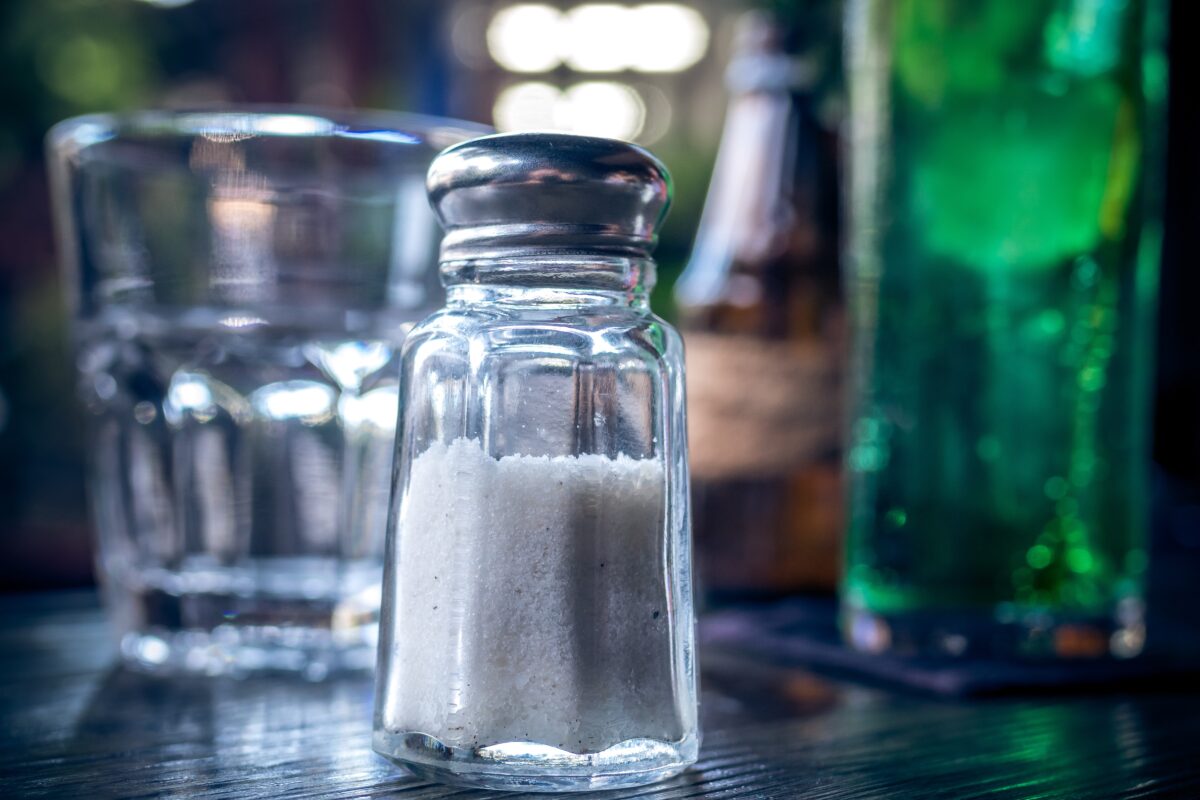 Why the War on Salt Is Dangerous

Do you still believe the myth that salt is bad for your blood pressure?
BY Joseph Mercola TIMEJuly 10, 2022 PRINT

Do you still believe the myth that salt is bad for your blood pressure? If you examine the evidence, you’ll quickly see that your risk for hypertension and heart disease is far more dependent on your ratio of this other mineral, and not sodium. And if you eat the standard American foods, your ratio is likely to be one-tenth of what’s ideal.

The theory that salt is bad for you and contributes to high blood pressure and heart disease is an idea that has become more or less cemented as dogma. Alas, the war on salt has had a number of drawbacks and unintended consequences. For starters, evidence shows having the correct potassium to sodium balance influences your risk for hypertension and heart disease to a far greater extent than high sodium alone, and the Western diet tends to be lacking in potassium.

Moreover, when lowering salt in processed foods, many manufacturers took to adding monosodium glutamate (MSG) instead — a flavor enhancer associated with a number of health problems, including obesity, headaches, fatigue and depression. Due to its ability to overexcite neurons, MSG may even raise your risk for neurological disorders such as Alzheimer’s, Parkinson’s and Lou Gehrig’s disease (ALS).

War on Salt Is Misguided

In 2010, New York City launched the National Salt Reduction Initiative, a salt-reduction plan aimed at lowering salt in processed foods and restaurant meals by 25% in the next four years. Two years later, Dr. Sean Lucan of the Albert Einstein College of Medicine wrote an article published online in the American Journal of Public Health, saying:[1]

“We cannot extrapolate that lowering sodium consumption would reduce cardiovascular risk or premature death. Despite assertions to the contrary, we do not know that reducing mean population sodium intake would decrease the risk of cardiovascular disease or save lives.”

At the time, Lucan told the New York Post:[2]

“We can’t just swallow this as fact — there’s actually debate about this. My concern is that they’re focusing on a single ingredient that the food industry is going to have to replace with something — and what they replace it with might be more damaging.”

Lucan also noted that the relationship between sodium and blood pressure is inconsistent and from a clinical standpoint, insubstantial. Moreover, he stressed that some studies actually show a low-salt diet can worsen cardiovascular disease and raise rather than lower the risk for early death among patients at high risk of heart disease. In addition, lowering salt intake could also decrease insulin sensitivity and have an adverse effect on blood lipids. Correctly, Lucan noted that “Refined carbohydrates are a greater enemy.”

Studies have clearly shown that having the correct balance of potassium to sodium is far more important than lowering salt alone. Potassium is a naturally occurring mineral your body uses as an electrolyte (substance in solution that conducts electricity), and it is vital for optimal health and normal functioning.

Potassium works in your body to relax the walls of your arteries, keep your muscles from cramping and lowers your blood pressure.[3] The reduction in blood pressure with added potassium has also been associated in studies with a reduced risk of stroke.[4]

While diarrhea, vomiting, excessive sweating (such as when using a sauna) and some drugs may deplete or disrupt your potassium balance, the most common reason for low potassium is eating a potassium-poor diet. If you’re eating mostly processed foods, your sodium-to-potassium balance is virtually guaranteed to be inversed.

The average reported intake of potassium from food is about half of the 4,700 milligrams (mg) recommended.[5] Research demonstrates these low levels of potassium may have a significant impact on blood pressure, especially when combined with too much salt.

The Many Benefits of Potassium

Adequate amounts of potassium are also associated with quicker recovery from exercise and improved muscle strength.[11][12] As an electrolyte, potassium helps to regulate the fluid balance in your cells and throughout your body.[13] This fluid balance is essential to maintaining life, preventing dehydration at the cellular level and maintaining brain function.[14]

For example, potassium is important in the transmission of nerve impulses in your brain, spinal cord and peripheral nervous system.[15] Nerve impulses transmitting information from one nerve to the next happens as the result of electrical activity. This activity is what an electrocardiogram measures as it tracks heart activity.

Low levels of potassium have also been linked with high levels of insulin and glucose,[16] which are associated with metabolic syndrome and type 2 diabetes.[17] These results have been found in several studies,[18] leading researchers to recommend dietary choices that boost potassium levels and reduce the risk of type 2 diabetes.

If you’re unsure, use cronometer.com/mercola, a nutrient tracker that allows you to enter the foods you eat and then calculates the ratio automatically. It’s generally recommended that you consume five times more potassium than sodium, but most Americans eat twice as much sodium as potassium.

This ratio is far more important for your health than your overall salt intake,[19] and a better strategy to promote public health would be to forgo the strict sodium reduction element and focus recommendations on a high-quality diet rich in potassium instead, as this nutrient helps offset the hypertensive effects of sodium.

Imbalance in this ratio can not only lead to high blood pressure but also contribute to a number of other health problems, including:

As Lucan suspected, in many cases, food manufacturers did indeed replace the salt with something more damaging, namely MSG. In an effort to normalize this substitution by declaring it safe and healthy, the International Glutamate Information Service wrote the article, “MSG Is Useful in a Reduced Sodium Diet,” saying:[20]

“Since its discovery over 100 years ago, [MSG] has been used effectively to enhance the umami taste in food. It is also an effective means of reducing the levels of salt used in food preparation.

Studies have demonstrated that people find food with low levels of salt much more acceptable when a small amount of [MSG] is added. MSG is mistakenly thought of as being high in sodium. However, MSG contains only one-third the amount of sodium as table salt …

MSG is often an important ingredient for people on a low-sodium diet, because it improves the flavor of a dish while reducing the need for salt … [W]hen MSG is added … sodium levels can be lowered by up to 40 percent while maintaining the desired flavor.”

While MSG is touted as a safe food additive, having received “Generally Recognized as Safe” (GRAS) status in 1959, scientific evidence against it has stacked up. Ironically, MSG has even been linked to high blood pressure,[21] effectively negating the proposed benefit of replacing sodium with MSG. Research has also linked MSG consumption to:

Acute Side Effects of MSG Ingestion

Many also experience more immediate side effects from MSG, with a pounding headache being one of the most prominent. While the exact cause of MSG-induced headache remains unclear, research investigating the matter has demonstrated that MSG “induces a dose-dependent swelling and death of mature neurons,”[37] which may be part of the equation. Other common side effects that may occur within an hour or so of eating MSG include:[38][39]

The MSG Symptom Complex Is Real

A double-blind, placebo-controlled, randomized study[40] published in 1997 investigated MSG symptoms by conducting an oral challenge in “self-identified MSG-sensitive subjects” to see whether they really had a higher incidence of symptoms after eating MSG, compared to a placebo. Sixty-one participants received 5 grams (gm) of MSG or placebo as an initial challenge. Of them:

While many reported side effects from the placebo, the severity of symptoms were greater among those who received MSG than placebo. The participants were then rechallenged with placebo and 1.25, 2.5 and 5 gm of MSG. According to the authors:

Oral challenge with MSG reproduced symptoms in alleged sensitive person … According to Food and Drug Administration recommendations, the symptoms, originally called the Chinese restaurant syndrome, are better referred to as the MSG symptom complex.”

Certain compounds have been found to offer some protection against MSG’s adverse effects. Vitamin C was found to provide “significant protection against MSG toxicity” in one study,[41] and lycopene has also been found to avert its neurotoxic effects. A study investigating the latter gave male rats either 5 milligrams (mg) per kilo (kg) of MSG, 10 mg/kg of lycopene, MSG with lycopene, or placebo, for 30 days. According to the authors:

“The results showed that MSG induced elevation in lipid peroxidation marker and perturbation in the antioxidant homeostasis … Glutathione S-transferase … superoxide dismutase … and catalase … activities and gene expression were increased and glutathione content was reduced in the MSG-challenged rats, and these effects were ameliorated by lycopene …

Our results indicate that lycopene appears to be highly effective in relieving the toxic effects of MSG by inhibiting lipid peroxidation and inducing modifications in the activity of cholinesterase and antioxidant pathways. Interestingly, lycopene protects brain tissue by inhibiting apoptosis signaling induced by MSG.”

While added MSG must be listed in the list of ingredients as “monosodium glutamate,” its absence is no guarantee of safety. MSG and synthetic free glutamate in varying amounts can still hide in processed foods under names such as:[42]

While not commonly known, MSG is even used as a stabilizer in certain vaccines,[43] which seems to be a particularly bad idea considering its many adverse health effects, particularly on the brain. According to the U.S. Centers for Disease Control and Prevention, MSG can be found in the following five vaccines:[44]

Real Food Is the Answer

Getting nutrients from your food instead of supplements is preferable as your food contains more than a single nutrient and in different forms. For instance, potassium found in fruits and vegetables is potassium citrate or potassium malate, while supplements are often potassium chloride. The citrate and malate forms help produce alkali, which may promote bone health[45] and preserve lean muscle mass as you age.[46]

“When it comes to dietary concerns regarding bone health, calcium and vitamin D have received the most attention, but there is increasing evidence that the acid/base balance of the diet is also important …

When fruits and vegetables are metabolized, they add bicarbonate, an alkaline compound, to the body. Our study found that bicarbonate had a favorable effect on bone resorption and calcium excretion. This suggests that increasing the alkali content of the diet may attenuate bone loss in healthy older adults.”

Research by Dawson-Hughes found that people who were in the neutral range for net acid excretion, meaning they had a fairly healthy balance for bone and muscle health, were eating just over eight servings of fruits and vegetables per day along with 5.5 servings of grains. When they rounded this out, it came to about half as many grains as fruits and vegetables.

For many Americans, a simple recommendation to increase your alkali (and potassium) while reducing acid is to eat more vegetables and fewer grains and processed foods in general. When cooking from scratch, you have complete control over how much salt you add.

In addition to that, when you do use salt, make sure its unrefined and minimally processed. My personal favorite is Himalayan pink salt, rich in naturally-occurring trace minerals needed for healthy bones, fluid balance and overall health. To learn more about the importance of unprocessed salt in your diet, see the related articles listed.

[16] UCF Health. The Relationship Between Potassium and Diabetes