VP Says Shen Yun Is a Great Experience for the Family 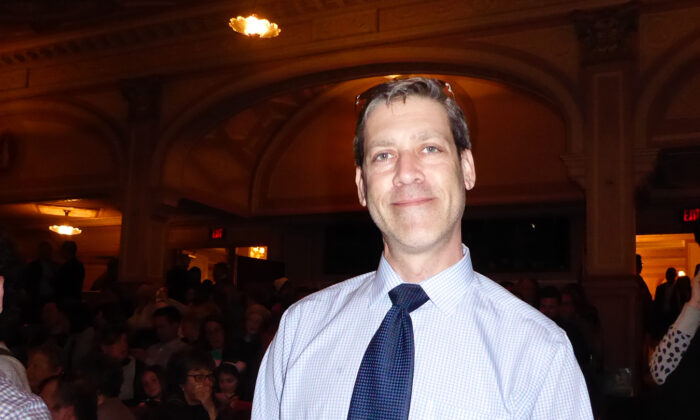 His two children, ages 5 and 9 years old, are lovers of the arts and were the ones who wished for their family to see the performing arts show.

“The practice, the discipline, the beauty of it, it’s a great thing to show children and a great thing for my wife and I, just to enjoy the arts on a great Sunday,” Brewstein said at the Merriam Theater.

Based in New York, Shen Yun is the world’s leading classical Chinese dance and music company. It was founded in 2006 and has a mission of reviving 5,000 years of traditional Chinese culture which has been at risk of being lost to the world forever.

From folk and ethnic dances to story dances, Shen Yun’s program is rich with culture and history that serves as both wonderful entertainment as well as inspiring information. Many of Shen Yun’s dances tell of China’s past and of the values that have been passed down from generation to generation.

Brewstein expressed great appreciation for this aspect of Shen Yun.

He said, “The exposure alone is a huge thing, just be able to sit and watch the dedication and practice that the artists have put in is something that we encourage at home, and to see that translate into a performance that lasts two hours when they put years of time in is something we really want to drive, is the educational value of practice and dedication and teamwork.”

And while it is great that Western audiences have been able to experience authentic Chinese culture, Shen Yun cannot be seen in China. The performing arts company has been barred by the Chinese Communist Party (CCP) from performing in China. Because it is atheistic in nature, the CCP sees Shen Yun as an existential threat to its rule over China.

In addition to forbidding Shen Yun from coming to China, the CCP has been directly responsible for the drastic decline of traditional Chinese culture. Movements like the Cultural Revolution of the mid-1900s were launched by the communist regime to eradicate traditional Chinese values and belief systems.

Despite this, Shen Yun is still fervently reviving China’s traditional culture through classical Chinese dance and music. And because it is such a core element of traditional Chinese culture, Shen Yun is also bringing spirituality back into the hearts of the American people.

With reporting by Frank Liang and Don Tran.