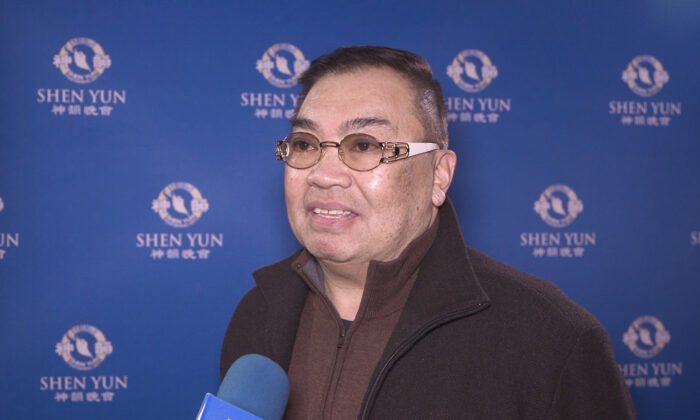 LAS VEGAS, Nev.—In a glittering town like Las Vegas, every night out is a star-studded event. Feb. 26’s Shen Yun performance was no different, with couturier David Tupaz, founder of the Las Vegas Fashion Design Council, among the audience.

“It’s wonderful to see Chinese culture before communism came—the richness of its culture and the variety of spiritual stories,” he said. “That seems to be very important today with what’s happening to the world today.

I think the message of Shen Yun transcends that, and it kind of relaxes our mind, and calms our spirit amidst all the turmoil, amidst all the pandemic.
— David Tupaz

“I think the message of Shen Yun transcends that, and it kind of relaxes our mind, and calms our spirit amidst all the turmoil, amidst all the pandemic,” he said. “So it’s like a breath of fresh air. And I recommend it.”

Shen Yun is a classical Chinese dance performance hailing from New York. It has toured the world every year since 2006, with new dances, new music, and new costumes every year.

Mr. Tupaz had heard about Shen Yun from friends and promotions. Seeing the program offered inspiration for his fashion design.

I have researched costumes and all that, so it has always been part of Chinese history.
— David Tupaz

“I think the inspiration for my collection next year will be inspired from Shen Yun,” he said, noting the large sleeves from ancient China. “I have researched costumes and all that, so it has always been part of Chinese history. And I think it’s wonderful and the coloration and everything grand.”

To anyone who is thinking about attending Shen Yun but hasn’t yet, Tupaz says:

“I think you have to watch Shen Yun not just because you’ve heard about it, but because it will calm your spirit. It will give you a different view of how culture is in Asia, especially in China before communism came.”

“I’ve been wanting to watch it for so long,” she said. “And I could never find anybody that will come with me to watch it. And finally, I found someone that was, you know, as amazed with the storyline as I am.”

“I love the costumes, the traditions—I hope they don’t get lost in transition. I admire the Chinese culture, you know, because it is just like they are the core of all cultures,” she said, adding that the wordless communication of dance and music are universal to everyone.

Ms. Chhun commented that “every single person was so talented,” and that at Shen Yun, the pandemic of the last couple of years fade away.

“I don’t feel anything associated with the pandemic at all, because the show is kind of like a fantasy. It takes you to a completely different world,” Ms. Chhun said.

Ms. Pacheco said a few words to the performers: “You guys keep doing what you’re doing. You’re amazing. You’re talented and you are bringing hope to Las Vegas and thank you for being here.”

Reporting by Linda Zhang and NTD