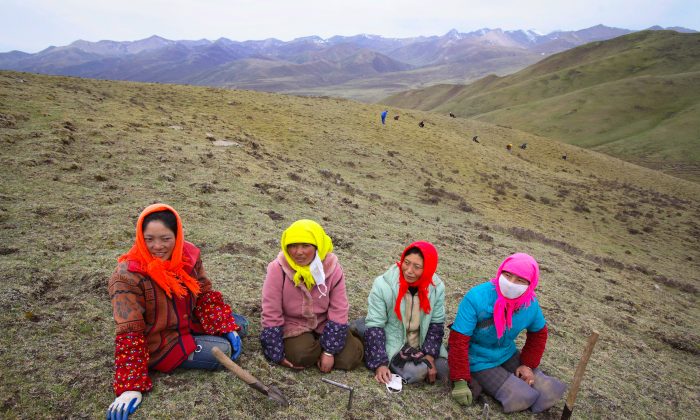 Mushrooms are some of the most mysterious creatures on the planet. One of the world’s weirdest examples comes from Tibet. The Tibetans call it “yartsa gunbu” (summer grass-winter worm).

In the West, we typically call this mushroom Cordyceps (club head), but this name actually applies to a wide range of fungi.

Cordyceps is a parasite that infects insects. To make yartsa gunbu, the victims must be ghost moth larvae. Rather than spinning a cocoon, the ghost moth caterpillar undergoes its transformation by burrowing underground, where it sometimes becomes infected by Cordyceps spores lurking in the soil. After the fungus devours the insect’s innards, a club shaped mushroom sprouts from the exoskeleton.

It’s strange to think that such a cruel fungus could have such a beneficial effect on the human body, but for centuries Tibetan and Chinese doctors have considered yartsa gunbu a very precious medicine. It is used to improve breathing, metabolism, sexual function, mental clarity, and more.

Yartsa gunbu is what modern herbalists call an adaptogen. And to those familiar with its power, it is considered one of the best adaptogens known to man. In Chinese medicine terms, yartsa gunbu strengthens the body’s essence and qi, nourishing the source of life itself.

The first known writing on yartsa gunbu comes from a Tibetan physician and lama of the 1400s, who described it as a “marvelous medicine” in many regards, but primarily a sexual tonic. Later, Chinese doctors began singing similar praises.

Tibet has enjoyed a vigorous caterpillar fungus trade with China for centuries, but in recent decades prices have skyrocketed. A pound of yartsa gunbu was less than $2 in the 1970s, and close to $100 in the 1990s. Today, a pound of high quality specimens could sell for as much as $40,000 or more. Total revenue from yartsa gunbu comes to about a $1 billion a year.

The story of yartsa gunbu’s meteoric rise in cost involves several different factors. At the dawn of the new millennium, when Viagra was wooing the West, the caterpillar fungus’s siren song called to wealthy men of the East. While yartsa gunbu had been treasured for centuries, in the late 1990s it became a status symbol among the Chinese elite. Its traditional reputation as a sexual tonic was a large part of its allure, and soaring prices made it exclusive. Fine specimens are often given as gifts to flatter and win favor with powerful men.

This move from ancient medicine to high end trend has dramatically changed the Tibetan economy. In the rural grasslands of the Tibetan plateau where the caterpillar fungus is found, people whose only income once came from the proceeds of yogurt, yak butter, and wool suddenly became flush with cash. Thanks to the mushroom boom, rural Tibetans can now purchase modern homes, flat screen TVs, iPhones, and get access to loans. Today, 40 percent of rural cash income from the Tibetan Autonomous region is thanks to the yartsa gunbu harvest.

Calling for a Sustainable Harvest

This new found wealth has been used to build schools and modern infrastructure in rural Tibet, as well as repair many of the ancient temples ruined in the “peaceful liberation” by the Chinese communist army in the 1950s. But this fungal gold rush also has a dark side. Disputes over mushroom hunting territory have led to several murders, and an unprecedented rate of harvesting raises concerns of sustainability.

Ecologist and mushroom specialist Daniel Winkler has been pushing for a more sustainable yartsa gunbu harvest for nearly 15 years. But his plan to field test harvesting techniques to prevent over picking and preserve the mushroom for the future has been a hard sell. His 2009 research proposal was rejected, and Chinese universities are not interested in taking on the project.

Winkler has attended several conferences in China to discuss his sustainability plan, but the Chinese regime is already sold on another strategy: cultivating the ghost moth and propagating the fungus artificially. While this would take pressure off natural resources, it is sure to devastate the Tibetan economy.

“It completely disrespects all these people who make a living from caterpillar fungus right now,” said Winkler. “Their idea of sustainability has nothing to do with the people involved. It’s all about making big bucks cultivating it; capturing the profits under the cover of sustainability.”

Consider the price drop for a second-tier insect mushroom with similar medicinal properties: Cordyceps militaris. In the 1990s, a pound (if you could find it) would cost nearly $80. Once scientists learned to successfully cultivate it, however, prices fell sharply. The going rate is now $1.50 per pound.

In traditional Tibetan and Chinese medicine, yartsa gunbu is the ultimate remedy to treat problems in the lung and kidney systems, such as asthma, emphysema, renal failure, backache, fertility, and fatigue. Like ginseng, the caterpillar fungus has long been a favorite of the elderly because of its ability to increase energy and stamina.

While the Chinese have a rich tradition of herbal medicine, they have also earned a reputation for embracing questionable remedies (think rhino horn, tiger bone, bear gallbladder, and yak penis).

Yartsa gunbu is different. Although it’s still a weird remedy, in the last 20 years, the caterpillar mushroom’s medicinal virtues have attracted a Western audience.

However, instead of studying yartsa gunbu itself, researchers in the West have focused their attention on a specific strain of the fungus.

Nearly all Cordyceps used in American supplements is manufactured in a lab much like penicillin or brewer’s yeast, no caterpillars necessary. The single mycelium (which Winkler said could never produce an actual mushroom in the wild) is grown on grains, typically rye, and sold as a powder for about $60 a pound.

Manufacturers claim that the lab grown stuff is as much as five times as potent as yartsa gunbu. At a hundredth of the cost of the real stuff it sounds like a great deal. But Winkler said the comparison is not accurate.

“These are marketers. They are not researchers. Yes, they support research, and they move the field forward and promote the fungal pharmacy, which is the future, I have no doubt. But these statements are a sales pitch,” he said. “What’s on the market in the West is just one aspect of the natural product. It doesn’t contain the whole range of active ingredients the wild product would contain.”

No one has taken on the expense and effort required to test the medicinal effects of wild yartsa gunbu. However, studies on lab grown Cordyceps have shown some promise. The fungus has demonstrated immune modulating, anti-viral, anti-cancer, antioxidation, and cholesterol reduction activity. It has also been shown to improve digestion and detoxification.

Traditionally, yartsa gunbu is used more like a food than a medicine, and often added to soup with pork or chicken. One old recipe calls for inserting the mushroom into a duck’s stomach and roasting the whole bird.

Traditional dosages of the caterpillar fungus are large. In his 1995 book “Medicinal Mushrooms,” herbalist and acupuncturist Christopher Hobbs, recommends 3 to 9 grams of Cordyceps for weakness and debility. Hobbs points to an old Chinese recipe for treating anemia and impotence, which calls for 25 to 50 grams a day.

Using such doses today are pricey even for the lab grown stuff. Given the current cost of genuine caterpillar fungus, even a dose of one gram per day can cost a small fortune.

However, those who have experienced what the mushroom can do are happy to make the investment.

“I know Chinese people whose friends are willing to spend half of their income on this, because they feel like, ‘Well, I’m getting old. I’m falling apart. This buys me life.’ That’s why people are willing to pay this incredible amount,” said Winkler.