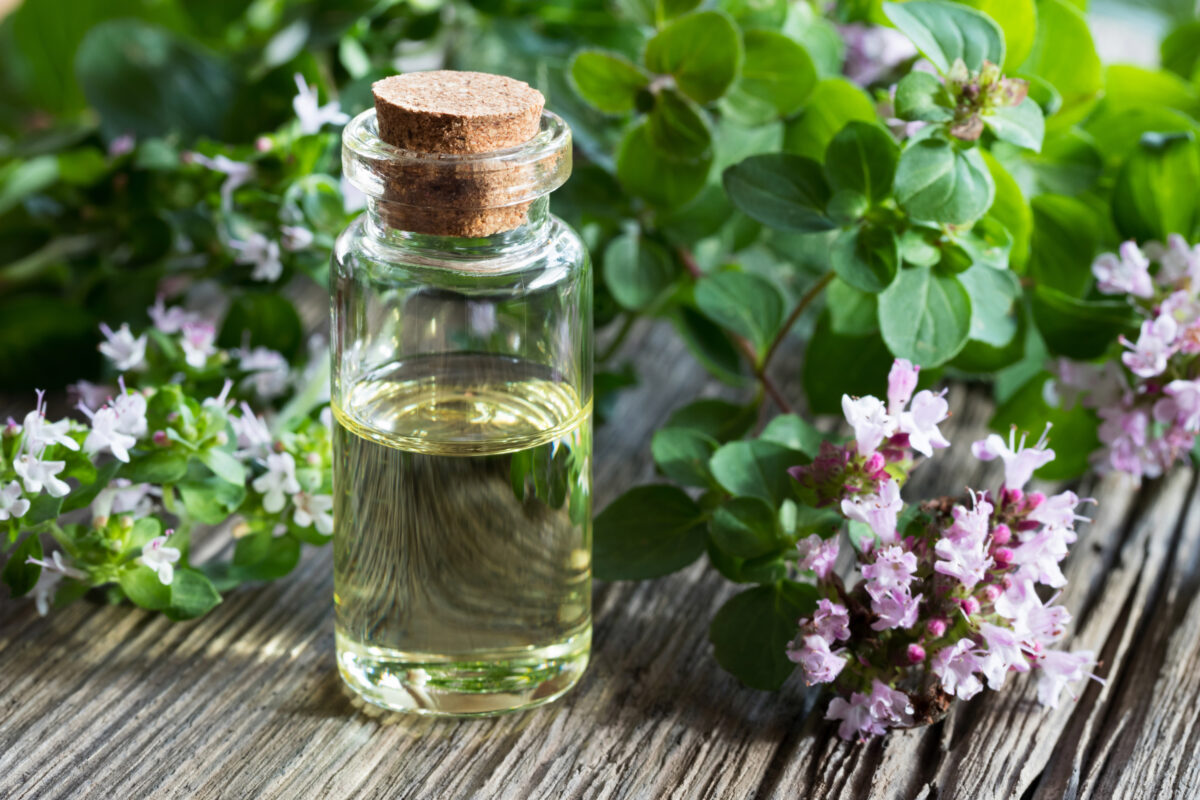 This Herb Can Do Wonders for Your Immune System

Your immune system is a complex network responsible for defending your body against pathogens. Consider including this herb to fight the common cold and support your gut microbiome.

Oregano (Origanum vulgare) is usually associated with Italian cooking. The perennial plant is part of the mint family (Lamiaceae) and is native to Mediterranean and western Asian countries. Today, it’s one of the most widely used herbs and is even one of the herbs found in chili powder.[1]

Although popular in Greece and Italy, it was not brought to the U.S. until after World War II when pizza began trending, increasing the sale of the herb by 5,200% between 1948 and 1956.[2]

Another variety of oregano more familiar to Mexican meals is called Mexican oregano (Lippia graveolens). It is from a different botanical family and is sometimes called Mexican marjoram, likely since oregano is a close relative of marjoram.

Marjoram is in the same genus as oregano, but it is a different species with a gentler aroma and flavor. Oregano can be used fresh or dried, but marjoram is best used fresh.[3] Dried oregano has a subtler flavor than the pungent taste of the fresh leaves.[4]

Origanum vulgare is a perennial plant that grows up to 3 feet high and 2 feet wide.[5] It is easily grown in your garden, enjoys full sun and is a low maintenance plant that attracts butterflies. It blooms between July and October with pinkish-purple or white flowers.

Oregano essential oils have been studied extensively as the plant and oil have a rich history in traditional medicine,[6] beginning in the Middle Ages when the leaves were chewed to help reduce the pain of rheumatism, toothache and indigestion. The ancient Greeks used it to treat skin conditions and the herb was used in China for fever and upset stomach.

Oregano Is a Potent Antioxidant With High ORAC Value

The herb is rich in phenols, which are natural phytochemicals that have beneficial antioxidant effects.[7] The two most abundant are thymol and carvacrol.[8] An antioxidant is a term used to describe a compound that counteracts unstable molecules. These are called free radicals and are naturally produced during oxidative metabolism.

One lab analysis of the antioxidant ability of foods is called the Oxygen Radical Absorbance Capacity (ORAC). The measurement was used to demonstrate that foods high in antioxidant capacity could help slow the process of aging in the brain and body.[9]

“If we can show some relationship between ORAC intake and health outcome in people, I think we may reach a point where the ORAC value will become a new standard for good antioxidant protection.”

According to Natural Products Insider, in 2012, the USDA removed the ORAC Database for Selected Foods citing evidence that the values have no relevance to the effect of specific compounds on human health.[13] According to the USDA “ORAC values are routinely misused by food and dietary supplement manufacturing companies to promote their products and by consumers to guide their food and dietary supplement choices.”

Prior, who was the senior researcher at the USDA for 35 years, disagrees, calling it unfortunate that ORAC has sometimes been misused,[14]

“… but that does not necessarily mean that the information is not useful if used appropriately. In too many cases, the goal has been to obtain the highest antioxidant value. It is not always the case that more is better and, in some cases, using individual antioxidant compounds, more may be detrimental.”

The list of foods has since been taken offline but is available for download.[15] Fresh oregano has an ORAC value of 13,970 and dried herb a value of 175,295. A comparison list of fresh herbs places oregano just below marjoram, thyme and sage in a list of herbs.[16]

Separating the phytochemicals from plants and using them individually raises the potential of experiencing side effects. The antioxidant compounds found in the whole oregano plant or essential oil work synergistically to provide a host of health benefits from the antioxidant, antimicrobial, antiviral and antifungal properties.[17]

Have You Considered Oil of Oregano for the Common Cold?

According to the National Center for Complementary and Integrative Health,[18] each year there are more than 1 billion people who contract a cold in the U.S. and up to 20% of people got the flu. Rhinovirus is one of the most common viruses that cause the common cold.[19] However, other viruses can also cause cold symptoms, including coronaviruses such as SARS-CoV-2.[20]

A few studies have evaluated the efficacy of oregano essential oil or oregano oil extract against upper respiratory infections. One 2019 study[21] looked at a blend of oregano, thyme and salvia oils against upper respiratory tract viruses, including adenovirus 5, rhinovirus, influenza and RSV. The blend showed strong antiviral activity against rhinovirus and two of the three strains of influenza.

Rosmarinic acid has been identified as a major antioxidant in oregano,[22] and research[23] has demonstrated it can inhibit seasonal allergic rhinoconjunctivitis in patients using two independent mechanisms — inhibition of the inflammatory response and scavenging reactive oxygen species.

Data[24] also show that French oregano tablets rapidly reduced symptoms in patients with the common cough and cold. The research found that it was effective in a dose-dependent manner and was superior to the conventional treatment used during the study.

Your immune system is largely supported by the beneficial bacteria in your gastrointestinal tract, referred to as your gut microbiome. Oregano oil can have an impact on supporting your gut microbiome and treating bacterial overgrowth.

Norovirus triggers nearly 1 in every 5 cases of gastroenteritis that lead to diarrhea and vomiting.[25] Each year approximately 900 people die from norovirus in the up to 21 million cases reported.[26] Using cell cultures from small animals,[27] researchers[28] found that carvacrol can drop viral infectivity within 15 minutes of exposure.

Oregano oil and carvacrol are also active against bacterial agents in the kitchen that can lead to food poisoning. For example, another study[29] found oregano essential oil could remove staphylococcus aureus biofilms on stainless steel.

Finally, oregano oil also shows activity against small intestinal bacterial overgrowth (SIBO). This condition can develop after surgery, disease or medications have slowed the intestinal tract, which then sets up a breeding ground for harmful bacteria.[30] Excess harmful bacteria can cause malnutrition, diarrhea and weight loss.

In one review of the literature,[31] researchers found that more than 38% of people with irritable bowel syndrome also had SIBO. Another study[32] gathered participants who tested positive for SIBO and offered herbal therapy or rifaximin, currently used for traveler’s diarrhea caused by E. coli.[33]

“Herbal therapies are at least as effective as rifaximin for resolution of SIBO by LBT [lactulose breath test]. Herbals also appear to be as effective as triple antibiotic therapy for SIBO rescue therapy for rifaximin non-responders. Further, prospective studies are needed to validate these findings and explore additional alternative therapies in patients with refractory SIBO.”

Nearly 25% of all fungal infections worldwide are caused by dermatophytes.[35] Skin infections are difficult to treat and are growing resistant to conventional medications. One study[36] published in 2020 evaluated the efficacy of a wide range of essential oils against Microsporum and Trichophyton, two common fungi responsible for athlete’s foot and ringworm. They found that of the 65 essential oils tested, oregano was in the top five most potent.

Another study[37] found the combination of oregano oil, heat and salt was an effective treatment for athlete’s foot caused by Trichophyton mentagrophytes. And another team of researchers[38] successfully used oregano and thyme essential oils as a fumigant against fungi attacking stored grain, finding it was an effective alternative to chemicals.

Wound infections present a significant health care challenge, costing Medicare up to $96.8 billion every year.[40] One study[41] demonstrated that the combination of turmeric and oregano extracts may be an effective addition to wound care dressings for diabetics and non-diabetics. Using relatively low concentrations, it demonstrated antibacterial and anti-inflammatory properties.

A second study[42] incorporated oregano essential oil into antimicrobial wound dressings and found concentrations at 5% inhibited all the tested strains of bacteria, including Staphylococcus aureus, MRSA and E coli.

Later, researchers[44] used an animal model to demonstrate the phytonutrient carvacrol could reduce pathogenic T-cell responses, which suggested it offered a novel opportunity to develop “a dietary based intervention in chronic inflammatory diseases.”

By 2018, researchers[45] were looking at the effect carvacrol had on fibroblast-like synoviocytes, which play a role in the chronic inflammatory process found in rheumatoid arthritis. The researchers discovered the phytochemical could inhibit the production of inflammatory cytokines and prevent the activation of several pathways that may be involved in inflammation.

The anti-inflammatory and antimicrobial properties of oregano oil have made it a popular addition to skincare products. One study[46] looked at the biological activity in a human skin cell model and found evidence that suggests oregano essential oil not only is a promising candidate as an anti-inflammatory, but one with anticancer properties as well.

Take Care When Choosing Your Oil

Oregano oil extract, also called oil of oregano,[48] can be made at home by simply adding chopped leaves to olive oil and heating the mixture in a boiling water bath for 10 minutes to release the natural oil from the oregano leaves. This is stored for one to two weeks before the leaves are drained, and the oil is stored in an airtight container. Oil of oregano can also be purchased in liquid or capsule form.

When purchasing your oregano oil, take care to check the label to make sure it’s made by a trusted manufacturer that sells pure, organic oils, as many “bargain” brands can be adulterated. Also remember that oregano oil must be used with a carrier oil. My top carrier oil choices are olive, coconut or jojoba. When you’re ready to use it, remember to test it on a small area of your skin, first, to be sure you don’t have a local allergic reaction.

Clinical herbalist Michelle Lynde writes[49] that the ideal ratio when diluting oregano oil for topical use is one part oregano oil to three parts carrier oil. A few drops of essential oil can also be added to a vaporizer or diffuser to help relieve the symptoms of allergies, sinusitis, chronic bronchitis and coughs.

However, the oil should be avoided by women who are pregnant or nursing, and it should not be given to babies or children. People who have high blood pressure or a heart condition should also avoid using oregano oil.

[3] The Epicentre, All About Oregano, For Delicacy try Marjoram

[6] My Spicer, The History of Oregano, History, Medicinal uses

[18] National Center for Complementary and Integrative Health, Cold and Flu in Depth, Some Basics

[20] Yale Medicine, Coronavirus, What is a coronavirus

[26] Centers for Disease Control and Prevention, Burden of Norovirus Illness in the U.S.