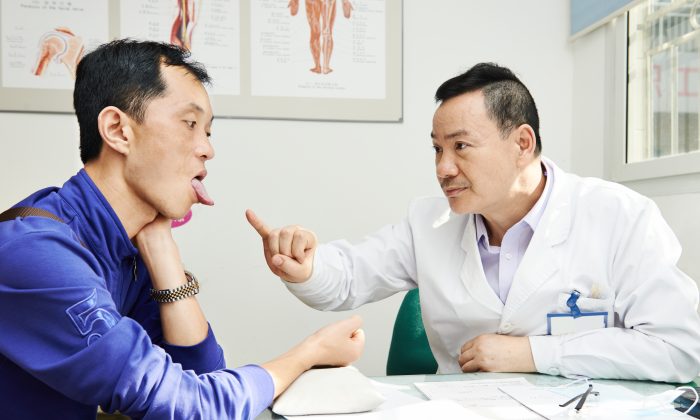 The Tongue Is a Map of the Body in Chinese Medicine

Your tongue does more than just taste food and articulate words. According to traditional Chinese medicine, it is also a convenient diagnostic tool.

Before X-rays, MRIs, and CT scans, ancient doctors had other methods to examine the internal health of their patients. Tongue diagnosis is one such practice still widely used today. For those who know how to read the tongue’s secrets, it can reveal signs of disease and imbalance that the patient may not share or even know.

In Chinese medicine, the tongue serves as a map of the internal organs. The tip of the tongue reflects organs that are higher in the chest: the lungs and heart.

Abnormalities found on the tongue map can give an acupuncturist clues to where a patient’s imbalances are located and how best they can be treated.

According to Eric Baker, a Chicago-based acupuncturist and professor at the Pacific College of Oriental Medicine, the concept of tongue diagnosis stems from a holographic perspective that permeates much of ancient Chinese culture.

“In a hologram, every part of the picture is a reflection of the whole,” Baker said. “In Chinese medicine, each part of the body is like a miniature of the whole body. In Western scientific culture, you might call this self-similarity. It’s sort of a fractal way of looking at things.”

In addition to its holographic nature, the tongue is a unique organ because it exists in two realms. It’s not quite an internal organ, but it’s not quite an external one either. You have to open your mouth wide and stick out your tongue in order to get a good look at it.

Usually the signs on the tongue map are subtle and can easily escape the untrained eye. But extreme cases can produce undeniable examples.

Chinese medicine is the longest clinical trial in the history of medicine.
— Eric Baker, professor, Pacific College of Oriental Medicine

Baker mentions a past patient of his, a woman in her late 40s to early 50s with hepatitis C that could not be controlled with modern Western medicine. She complained of pain on her right side, where her liver is located.

Remarkably, her tongue pointed to severe liver problems too. Baker saw a black spot on the right edge, exactly where the liver is located on the tongue map.

“I tell students to go in with an open mind, but you also want to be critical. You don’t want to believe just anything it says in the textbook. But then you get cases like this that are so perfect,” Baker said.

“Here’s a lady with a liver problem, and she has the exact indication you would expect—a black spot showing deeper damage to the liver from uncontrolled infection. This is Chinese medicine doing exactly what it’s supposed to do.”

Stick out your tongue in front of acupuncturists, and its color will be the first thing they notice.

A healthy tongue is a pinkish-red—a sign of good circulation. If the circulation is restricted—in cases of menstrual pain, for example—the tongue will be more purple.

A pale tongue is a sign of a lack of blood, such as anemia. If a tongue goes too red, it may indicate a fever or high blood pressure.

If a tongue is extra red in a particular area of the tongue map, this demonstrates internal heat in the corresponding organ. For example, a red tongue tip could be a sign of infection in the lungs or what Chinese medicine calls “heart fire,” a condition characterized by anxiety and insomnia.

A healthy tongue is a pinkish-red—a sign of good circulation.

Another tongue characteristic to consider is the coat. Look at your tongue in the mirror, and you may notice that it wears a film on its surface. This is called the “tongue coat,” or “tongue fur.”

You can try brushing the coat off with a toothbrush, but it will soon sprout a new one. A thin white coat is considered healthy—a sign of good digestion. A thick, greasy, or yellow coat may reveal signs of imbalance.

“If someone has a lot of phlegm with nasal congestion or a cough, when you look at the tongue coat in these people, it’s thicker and heavier. Or it may start to get sticky, showing that there are these excess obstructive fluids collecting in the body,” Baker said.

A tongue examination requires good lighting and a clean tongue. For example, you won’t get an accurate reading immediately after someone eats a handful of Skittles or a grape-flavored popsicle.

Coffee is notorious for yellowing the tongue coat. Other foods and drugs can also temporarily obscure the tongue’s true colors.

Besides color and coat, the tongue also holds other clues to consider, like cracks, swelling, patches, and movement. A scalloped tongue (one with ridges on the outside edge) indicates fluid retention. These ridges develop because the tongue swells and presses against the teeth.

Some people also have a quivering tongue. Try as they might, it just won’t sit still. This is a sign of what Chinese medicine calls internal wind.

“If you have a disease like MS or Parkinson’s where there are tremors, you’ll see that the tongue body itself will quiver and tremor. That’s an indication that there are neurological things going on and a lack of proper motor control,” Baker said.

“Sometimes you may even see that preemptively in certain things. A tongue quiver may appear before a stroke, for example, where there can be neurological damage afterwards. You can see a quivering in the aftermath of some more serious diseases, but you might see it in certain situations as a predictor.”

Today, tongue diagnosis is a fundamental skill taught in Chinese medical schools all over the world. But several hundred years ago, instructions on how to read the tongue were a closely guarded secret.

While some aspects of Chinese medicine are thousands of years old, according to Ioannis Solos, Chinese medicine researcher and author of “Gold Mirrors and Tongue Reflections: The Cornerstone Classics of Chinese Medicine Tongue Diagnosis,” tongue diagnosis is a relatively recent development. Solos traces the roots of the practice from sometime in the 1300s with a manuscript by a mysterious doctor known only as Scholar Ao.

Understanding the Heart of Chinese Medicine

Scholar Ao’s unique ideas arose out of special historical circumstances, and for about 200 years, his knowledgle was restricted to a select few. Solos points to genetic evidence of a devastating plague spreading across China in the Song and Yuan dynasties. It caused gangrene of the extremities, turning hands and feet black with necrosis.

Chinese doctors from this time period would typically prescribe medicine based on a system of pulse diagnosis (as many acupuncturists still do today). Scholar Ao offered a diagnostic alternative: one that allowed doctors to examine patients without putting their own health in jeopardy.

“By the Yuan Dynasty (A.D. 1271–1368), gangrene and the speed by which the plague was spreading prevented many doctors from coming in direct contact with the patient,” Solos wrote to the Epoch Times.

“Scholar Ao’s manuscript included a list of 12 tongue illustrations followed by an herbal formula, partially resolving this problem according to his experiences. A tongue diagnostician of the era could simply check the patient’s tongue from a safe distance and prescribe without taking the pulse,” according to Solos.

Scholar Ao’s once-secret manuscript was discovered and expanded on by Du Qing-bi to include 36 tongue illustrations, each with a corresponding herbal formula to treat the condition it described. This version, published in the 1570s, is known as “Shang Han Jin Jing Lu.”

According to Solos, the book revolutionized Chinese medicine. Doctors continued to refine the practice over the centuries and produced a second volume, “Shang Han She Jian,” which contained more tongue charts and corresponding remedies, continuing the tradition that Scholar Ao began.

“By the early 20th century, the tongue system had achieved such levels of sophistication that its study could rival the theory of the pulse, but without the esoteric aspects that the latter method demands,” Solos said.

Scholar Ao’s method was taught to Chinese herbalists up until 1959. But big changes were made to the time-honored practice in 1960 when traditional Chinese medicine (TCM) underwent a standardization process.

In one fell swoop, many details of ancient Chinese medicine that had been treasured for centuries were cut or streamlined to make way for a more abbreviated version of the practice. According to Solos, this process “disturbed the entire system to its core.”

“In 1960, standardization of the newly found system of TCM meant that tongue diagnosis was ripped away from its herbal medicine origins and was attached to a standard ‘core of TCM Diagnosis’ that was meant to be applicable across all Chinese healing techniques. Today we often see acupuncturists checking the tongue, a practice that prior to 1960 was rare and not conforming to an established tradition.”

Today, the tongue illustration tradition that Scholar Ao began is often seen as a curious relic, as most Chinese medicine practitioners primarily learn tongue diagnosis from case-study photos. But Solos says that photography can’t always clearly instruct theory or impart a way of thinking as Scholar Ao’s illustrations can.

“This is what separates the pre-1960 tongue diagnosis with modern tongue diagnosis,” he said. “Ao’s illustrations were not used like photos, but rather as maps of tongues created specifically to instruct theory. With some instruction, a competent doctor of the era could understand the various patterns and pathologies and immediately prescribe with or without taking the pulse.”

According to Solos, the earliest versions of the comprehensive tongue map we know today was pretty much defined by the late Qing Dynasty (1644–1911). While a number of features of this practice have been lost in recent decades, tongue diagnosis continues to have relevance in modern medicine.

“In China they have these big hospital systems where modern Western medicine and traditional Chinese medicine are integrated. They see both sides, and there’s a lot more research being done there in those settings, and that includes tongue diagnosis too,” Baker said. “There is this ongoing clinical assessment to see where the old stuff holds up, and what new things we can find out.”

For example, research in Chinese hospitals has shown that cancer patients often present purple on their tongue exactly in the region where their cancer is located. Other studies looking at allergies in kids revealed a correlation of tongue coats that were patchy, heavy, and sticky.

“Chinese medicine is the longest clinical trial in the history of medicine,” Baker said. “These ideas developed over a very long period of time.”