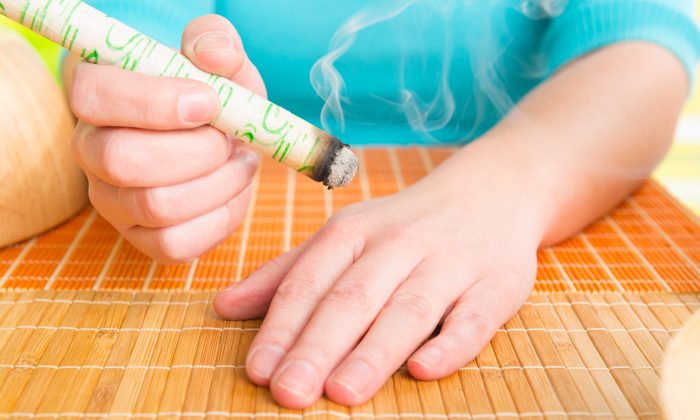 Moxibustion is an effective treatment for pain and many other health problems. Shutterstock/Monika Wisniewska
Alternative Health

The Healing Warmth of Moxibustion

Used extensively in Asia, but slow to catch on in the West
By Conan Milner

For ancient doctors, the guiding principle was balance.

Naturally, a patient who is cold and weak needs warmth and strength. In traditional Chinese medicine, the main remedy for this affliction is called moxibustion or moxa.

According to Dr. Tracy Stuardi, a licensed acupuncturist at the Doorway to Wellness clinic in Austin, Texas, moxa gives deep, penetrating heat to resolve underlying cold.

“The cold will settle in the uterus or the lower abdomen or the GI tract. Often time you can feel when you palpate areas where they’re cold where they shouldn’t be,” she said. “Moxa is an easy way to bring heat to the area.”

The name “moxa” is an anglicized version of the Japanese word “mogusa,” which means “burning herbs.” The practice involves burning medicinal cigars and cones on or near the body.

Moxa is said to have originated from northern China at least 3,000 years ago, and burned on acupuncture points long before the advent of needles. Today moxa is used to treat a wide range of issues, such as chronic digestive disturbance, menstrual problems, reproductive concerns, and advanced illnesses such as tuberculosis, Lyme disease, and cancer.

“It’s very powerful for pain,” said Stuardi. “Many patients we see come in with a lot of pain and sometimes the needles alone aren’t enough.”

Stuardi is unique in that many Western practitioners of Chinese medicine have shied away from moxa, preferring instead to focus attention on acupuncture.

“It’s a shame that more practitioners are not doing it,” she said. “I think a lot of people are intimidated. And it takes more time.”

In China, Japan, and Korea, moxa plays a major role in treatment, but in the United States the technique has been slow to catch on. Moxa is taught in Chinese medicine schools, but many American acupuncturists abandon this modality once they graduate.

According to Stuardi, the biggest issue with moxa is the smell. Moxibustion treatment creates an aromatic smoke which many people mistake for marijuana.

“People are like, ‘oh, what is that smell? Is that okay? Is it supposed to smell like that?”‘ she said. “The bottom line is that it’s a very effective technique.”

Moxa has not been researched as much as acupuncture, but the available literature shows positive effects on the blood, immunity, and the regeneration of tissue. A 1998 study published in the Journal of the American Medical Association found that 75 percent of pregnant women had their breech fetuses turn to the normal position with moxa burned on an acupuncture point located on the pinky toe.

While moxa may be considered a minor part of Chinese medicine in the West, ancient doctors held it in high regard. In the Nei Jing—a fundamental text in Chinese medicine—moxa is said to “do what the needle cannot.”

Some modern practitioners are taking this ancient notion to heart. Daniel Silver, a licensed acupuncturist, and adjunct professor at the National College of Natural Medicine in Portland, Oregon, described the complex case of a woman he recently treated with moxibustion. She had been in multiple car accidents, and had received acupuncture from various practitioners for months at a time, but only experienced minor improvements.

With just one session of moxa, however, she reported “life changing” effects.

“I’ve seen so many great results with patients,” said Silver. “I’m really convinced on a daily basis about the benefits of this, and hope more and more people can find it.”

Silver says that what keeps many American acupuncturists from using moxa is that they’re too worried about the possibility of accidentally burning a patient. He urges practitioners to overcome this fear with practice.

“It’s good for people to have a healthy respect and concern for it,” he said. “Part of the problem is that in the West we tend to think of medicine in a very intellectual way, and this is very much a hands on skill in which you need to develop proficiency so that it can be performed in a therapeutic manner.”

Moxa is made from a prolific weed called mugwort (Artemisia vulgaris), which is often prescribed in herbal medicine for uterine complaints, such as labor pain, menstrual cramps, and heavy bleeding, as well as digestive, hormonal, and circulatory disorders.

For use in moxibustion, mugwort is processed into a spongy material called moxa wool.

According to Lorraine Wilcox, author of two books on moxibustion for clinical use, ancient Chinese doctors choose mugwort because it had all the right qualities: it smolders easily, and produces a steady, slow burning heat.

On a Nov 17, 2014 episode of the Yin Yang podcast, an audio program for acupuncturists, Wilcox said one of the main reasons mugwort was chosen was for its magical properties.

“In really old books, mugwort is used against evil qi or ghosts or toxic things like snakes and scorpions and stuff like that,” she said. “So it has a supernatural aspect, as well as the creepy crawly things don’t much like it.”

Mugwort smoke has a calming effect on the nervous system. Once patients get over the funny smell, they may actually enjoy it.

“Some patients drift off into a nice euphoric rest during their treatment,” said Stuardi.

Moxa can benefit anyone, but there are times when it is not appropriate, such as with fever, infection, eczema, and other signs of excess heat. Points on the abdomen and lower back should be avoided in the early stages of pregnancy.

Moxa techniques are divided into two categories: direct and indirect. The direct method, which requires a skilled practitioner, burns directly on the skin. With the indirect method, a hot moxa ember is held about an inch away from the body.

The indirect method is easy to learn, and often times a practitioner may give the patient a moxa cigar and an acupuncture point to hold it over to continue treatment at home.

Hold the heat above the prescribed point, and pull it away when it gets too hot. Give the area a few seconds to cool, then resume treatment.

Stuardi instructs patients to go past the superficial feeling of warmth until the heat penetrates deep into the tissue. “Once you’ve felt the heat penetrate you’ll know you’ve done a good job and you can extinguish the stick,” she said. A session usually lasts between 5 and 10 minutes.

Moxa supplies are available in Chinatown shops, acupuncture schools, or over the Internet, and come in a variety of shapes and sizes: from cigarette butt-sized stumps with an adhesive end, to loose moxa wool.

One popular form is a charcoal-based smokeless moxa stick for those who want to avoid the smoke and smell. However, Stuardi believes these are less effective.

“I try never to use smokeless, unless for some reason that’s the only thing available,” she said.

“It has very, very little smell,” said Silver. “Most of the smell you get from this kind of moxa is from the incense you use to light it. Many people can tolerate it.”