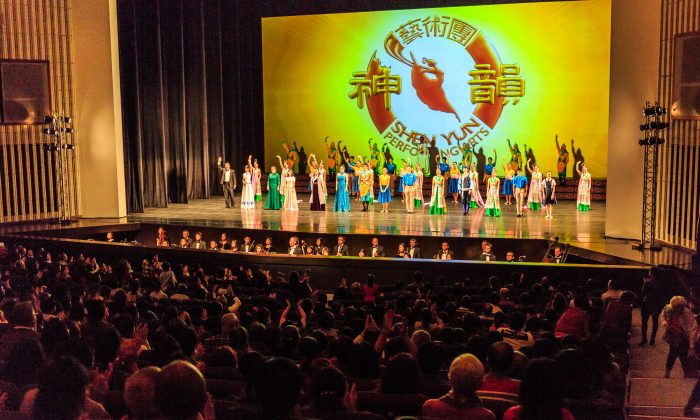 KAOHSIUNG, Taiwan—After tenor Joseph Chang went to Kaohsiuang Cultural Center to watch Shen Yun’s performance on March 7, he was glad to see that the company elegantly presented and promoted the essence of authentic Chinese culture to the generations who have long forgotten the beauty of it.

Chang loved the dances as well as how the artists presented traditional values in Chinese history. “Through the form of performing arts, Shen Yun presented stories which happened in ancient China and allowed the audience to understand different virtues in Chinese history. It also opened the door so others can have a peek at the beauty of Chinese classic arts and culture.”

As a tenor and choir conductor, Cheng thought Shen Yun’s combination of musical instruments from the East and the West was a great success. He would like to listen to more of such cross cultural music.

“It sounds more like Western style but the elements are mainly Chinese,” he said.

Chang admired and was excited about such a musical style, and said, “I think [Shen Yun] should keep creating this kind of music so those who are fond of it can gradually learn what Chinese classic music is like and understand the uniqueness of it.”

Shen Yun’s music was an inspiration to Chang’s own music making. “We all have our ethnic roots. Because we are Chinese, when we hear such music, we naturally have a strong feeling about what it is telling us and we can immediately melt into the stories.”

‘Keep compassion in your heart’

Xie Xiuqin, secretary-general of Taiwan Haifeng Art Museum, said, “This is my second time watching the Shen Yun show. In fact, I was deeply touched both times, especially by The Fable of the Magic Brush this time.”

Deeply moved by the program of The Power of Compassion, she said, “In fact, Shen Yun is disseminating a righteous message, that is, the message of sincerity, compassion, and beauty! You have to make them happen them in your daily life. The performance is really very touching and awesome!”

“These artists not only perform on the stage, but they also perfectly coordinate their body language with the music, costumes, and hi-tech dynamic backdrops. Besides traditional dances, other artistic elements are also perfectly integrated into their performances, so I was deeply moved,” she explained.

She added, “After going back home, I will tell all my friends that Shen Yun integrates the essence of Chinese culture into its performances, and it continuously disseminates the message of sincerity and compassion to the world.”

Lee Chi-Hung, president of a chemical trading company, Kao-Mu Ltd, missed a Shen Yun’s performance when he was in Australia several years ago. He decided not to miss it this time.

“The dance is very authentic and the overall presentation is not limited to the stage. It broadens my mind and inspires my soul. Visually the performance is such an enjoyment. Look at this auditorium full of people!” said Lee.

“When I was watching them perform, really, I thought I was an emperor. And I truly believe that the Chinese are a highly civilized nation.”

“Today’s performance combines dancing with music from both East and West and vividly tells the essence of a story. This is the first time I saw a performance like this. I feel very proud.”

Lee stressed that Shen Yun can bring positive influence to the society and people’s souls. “A lot of violence and degenerated ideas need to be changed with righteous energy. A lot of times people don’t have a sense of right and wrong.”