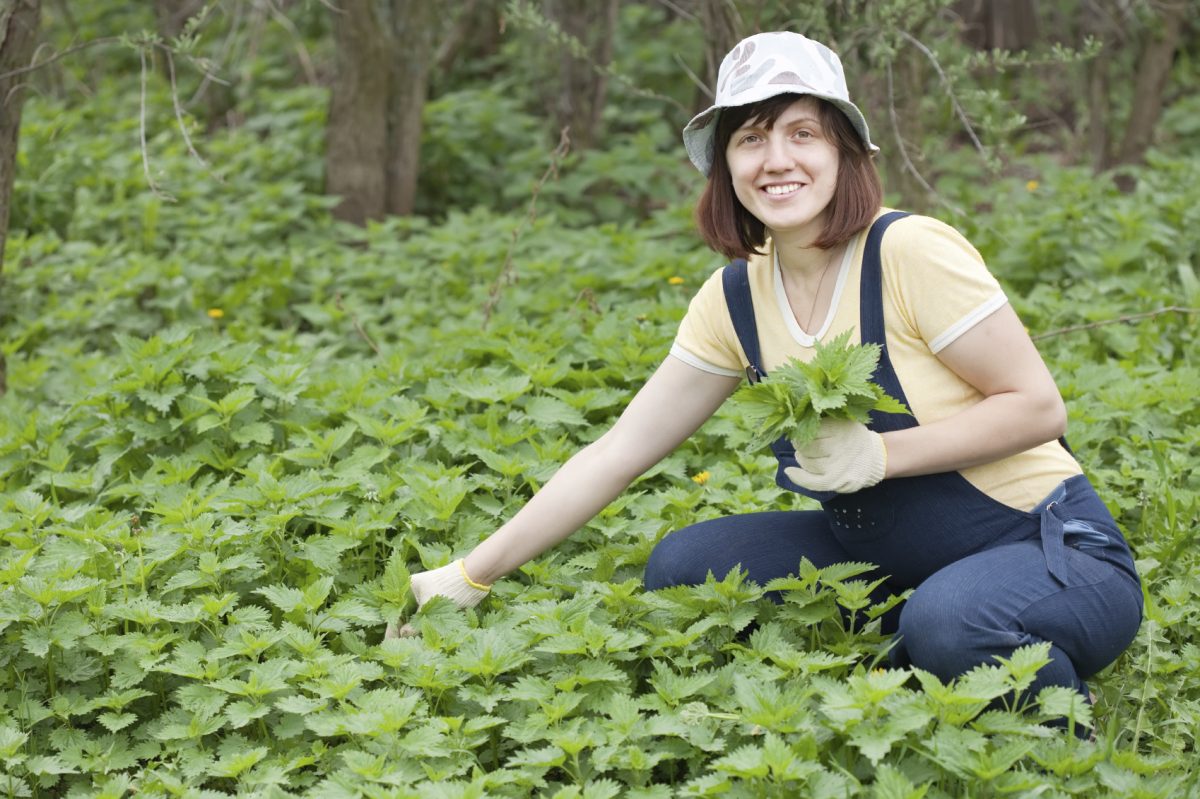 When picking nettles, be sure to bring some gloves. (JackF/iStock)
Health

Stinging nettle is an herb everyone should get to know.

Nettle is a common weed. It may not be exotic or sexy, but it easily outshines many of the so-called “superfoods” on the market. Nettle is one of the most nutrient dense plants on earth. It is the most concentrated plant source of iron and chlorophyll, and also rich in protein, selenium, magnesium, potassium, calcium, vitamins A, C D, K, and most Bs.

For all its nutritional attributes, nettle can be prickly when you first meet it. The name comes from the Anglo Saxon word for needle, a reference to the carpet of fine hairs that coat the leaf and stalk. When your skin brushes up against a fresh nettle plant, the hairs inject a chemical that causes redness, burns, and blisters.

After nettle is cooked or dried, the sting vanishes, and the plant is safe to consume. However, as far back as ancient Egypt, herbalists deliberately stung the skin with nettles to treat arthritis pain.

Most everyone can use nettle, but it is especially indicated for people who feel weak or run down. It has long been used to treat anemia, and is recommended by modern herbalists to address endocrine imbalances, such as an underactive thyroid or adrenal fatigue.

Nettle is also used to increase fertility, as well as for women who are already pregnant or lactating. In her “Wise Woman Herbal for the Childbearing Year,” herbalist Susun Weed recommends that pregnant women replace their morning cup of coffee with “a rich nettles infusion.” An infusion is a strong tea that brews for a long time. A nettles infusion is an opaque green-black color.

Weed says nettle nourishes the mother and the fetus, tonifies the uterus, diminishes birth pain, prevents hemorrhage, and improves the quality and quantity of breast milk.

Nettle is one of the first plants to emerge in the spring (even as early as late January), and is traditionally taken as a spring tonic, helping to shake off the rich food and sedentary habits that often take hold during the winter months.

Nettle can build you up, and also clean you out. It has a gentle laxative effect, and helps the body get rid of accumulated waste in the blood and elimination organs, especially the kidneys.

Nettle is traditionally indicated for urinary tract infections, kidney stones, and gout.  Some claim that it has been able to get them off kidney dialysis.  Nettle is a reliable diuretic, so expect to pee more if you take it on a regular basis.

Nettle is good for the lungs too. It relieves coughing and asthma, helps expectorate phlegm, and is used to reduce or eliminate seasonal allergy symptoms.

Some weeds will grow anywhere, but nettle is a picky plant. It wants nutrient rich, moist soil, so it is often found growing near wet, swampy areas or over septic systems.

According to herbalist Michael Moore, nettle is also attracted to the chemical runoff that flows from large commercial farming operations. But don’t pick these plants for food and medicine. In his book “Medicinal Plants of the Pacific West,” Moore warns that nettle growing in an irrigation ditch can accumulate inorganic nitrates and heavy metals.

“Since the same substitute heavy metal compounds are formed in our tissues if taken from the leaves, carefully avoid agribusiness and industrial areas,” Moore writes.

If you have a patch of nettle growing nearby, and away from agricultural chemicals, consider eating the cooked greens a as a wild substitute for spinach. Just make sure to pick it before it flowers (the leaves are more tender), and be sure to take along a thick pair of gloves to avoid getting stung.

If you don’t have access to fresh, use the dry form to make a tea or infusion. It’s inexpensive and easy to find. Buy it loose in bulk or in tea bags. It has a distinct grassy-earthy flavor with hints of seaweed and chocolate.

If you’re using nettle to treat a specific health problem, consult a qualified herbalist for an appropriate proper dosage, and be patient. Nettle is a slow acting herb. So it may take several weeks or months of regular consumption before you see a big difference in your condition.

According to legend, the great Tibetan sage Milarepa fed exclusively on nettle during his decades of solitary meditation practice. That’s why he’s depicted with green hair and skin (must have been all the chlorophyll).

Like hemp and flax, nettle was once a primary source of fiber for cloth and rope.

If you get stung by nettles, other wild herbs are traditionally used to soothe the pain. Apply the juice of freshly crushed leaves of yellow dock or jewelweed to the affected area.

Nettle root has special properties all its own. Nettle root extract has performed well in clinical trials for treating an enlarged prostate. Combined with saw palmetto berries, nettle has been shown to be just as effective at relieving swollen prostate symptoms as the prescription drug finasteride, without side effects.