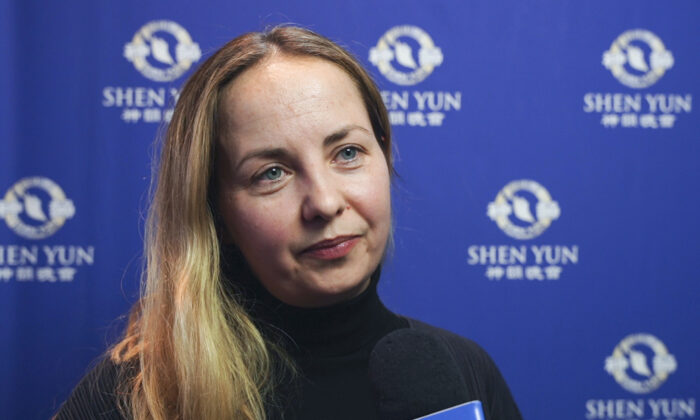 Anna Zhavoronkova at the Shen Yun Performing Arts performance at the Eventim Apollo, in London, on Feb. 27, 2022. (NTD)

“The level of the skill is outstanding. Absolutely amazing choreography. The storylines were fabulous,” Ms. Zhavoronkova, who owns the Skylark School of Dance in London, said after seeing Shen Yun on Feb. 27.

The artistry [was] amazing. The costumes are so beautiful, really, really beautiful.
— Anna Zhavoronkova

“The artistry [was] amazing. The costumes are so beautiful, really, really beautiful. The overall presentation is just really—I’m quite speechless to be honest,” Ms. Zhavoronkova said.

Ms. Zhavoronkova started ballet at an early age in Russia, where she did her training, and has performed in Europe and Asia throughout her career. Since arriving in the UK, she has taught at some of the top ballet schools in London and Sussex, and now runs her own ballet school.

“The storytelling was very accessible to all generations. … We were able to relate to the stories. We were drawn into this fabulous presentation. I think it was really cleverly put together,” she said.

The music played by the orchestra to accompany the dances gave Ms. Zhavoronkova goosebumps, she said.

“Stunning music. I literally had goosebumps, like shivers,” she said.

Ms. Zhavoronkova also had praise for the values presented in Shen Yun.

“The message is so positive, [message of] compassion. I think it’s very valuable,” she said.

“I thoroughly enjoyed [Shen Yun], and I would like to see it again in the future.”

‘I Learnt So Much From It’

Frances Carrington, a professional dancer who trained in ballet for over 10 years, said she has never seen a performance like Shen Yun.

“It’s amazing. I mean, the training it takes to get to that point, they must have worked every day for multiple years. And the timing—how they all are completely together in sync—the jumps, the height—it’s absolutely wonderful,” Ms. Carrington said.

“To be in that movement in the exact same pose, at the exact same time, and even when they’re doing the jumps, the exact same height is beyond what I’ve ever seen in a theatre—it’s amazing. The training and the technical difficulty and the hours put into rehearsal—this is hard; this is something that most high-level professionals—especially ballet dancers—can’t even pull off. The way that they express the movement is just as crucial as the way they move the costumes and the props. It must take separate classes to learn even how to use those things.”

But besides the artistry in the performance, Ms. Carrington was also drawn in by the spiritual aspect of Shen Yun.

“They believe in the divine spirit and it was enriching,” she said. “I love it so much because I learned so much from it, and I can go away from this performance feeling like I can take some of what they taught me and put it into my own life.”

Ms. Carrington said she will be taking away different lessons from the performance, both as a dancer as well as a person.

“As a dancer, I took away their technique and their level of expression, I want to put into my own dancing. As a person, I took away happiness,” she said.