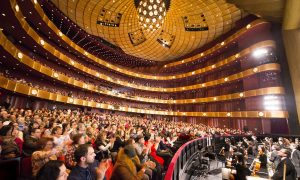 The first exciting performance of Shen Yun Performing Arts’ 2015 season in Southern California is just hours away, with Hollywood’s Dolby Theatre hosting its opening night on Thursday, Jan 22. It will play five shows through Sunday, Jan. 25, followed by nearly 30 more shows in six other cities throughout February.

Shen Yun, based in New York, is the world’s premier classical Chinese dance and music company. It has become a global phenomenon, touring around the world with an all-new production every year.

Visitors from many sectors of society have praised the quality of the performing arts company—from performing and visual artists and teachers to fashion designers, business owners, and government officials. All have experienced a warm appreciation for the deep history of the 5000 years of rich Chinese culture and traditional art forms displayed in Shen Yun.

Each year the company is welcomed back to Southern California with greetings and best wishes from noted leaders of all levels of government, and this year is no exception. Members of Congress, senators, state assembly members, city council members, county board members and mayors sent 41 certificates to commend Shen Yun and its 2015 tour.

California Assemblywoman Young Kim wrote, “Thank you for bringing cultural diversity and inspiration to Southern California through your outstanding live music and dance performance in celebration of traditional Chinese culture.”

California Senator Jeff Stone wrote, “You are to be commended for your dedication in providing the amazing gift of classical Chinese dance and music.”

Councilmembers from the City of Los Angeles congratulated Shen Yun for commitment in presenting classical Chinese dance to contemporary audiences, and wrote, “The performances uplift humanity through messages of courage, virtue, and harmony.”

Leaders in the entertainment industry have also praised Shen Yun for its ability to captivate as well as inspire.

Academy Award-winning director Robert Zemeckis, who watched Shen Yun in Santa Barbara, Calif., in March 2014, said he was moved by the performance.

“I think it’s exciting and moving. Moving in a compelling way; it makes you want to watch,” said the Forrest Gump and Back to the Future director.

Robert Stromberg, Oscar-winning production designer of Avatar, was highly impressed by the show’s creative, high-tech effects after seeing Shen Yun in Los Angeles in 2010. The show has been lauded for its unique artistic elements, such as digitally animated backdrops and enchanting costumes.

Classical Chinese dance, distilled from China’s many dynasties and ethnic groups, is known for its richness and expressiveness and is one of the most comprehensive dance systems in the world, according to the Shen Yun website.

Shen Yun Performing Arts was formed by a group of leading overseas classical Chinese artists in 2006. Now, the nonprofit organization now boasts four companies—each with its own full orchestra—that simultaneously tour the world each season.

Andre Brennan, a professional woodwinds musician, waited for months to finally see Shen Yun Performing Arts at Lincoln Center in New York on Jan. 17. He said the performance was perfect.

This season, Shen Yun will perform at the Dolby Theatre in Hollywood Jan. 22-25, the Valley Performing Arts Center in Northridge Jan. 27-28, the Segerstrom Center for the Arts in Costa Mesa Jan. 29 – Feb. 1, The Fred Kavli Theatre in Thousand Oaks Feb. 3-5, the Terrace Theater in Long Beach Feb. 7-8, the California Center for the Arts in Escondido Feb. 18-24, and the Rabobank Theater in Bakersfield Feb. 26-27.