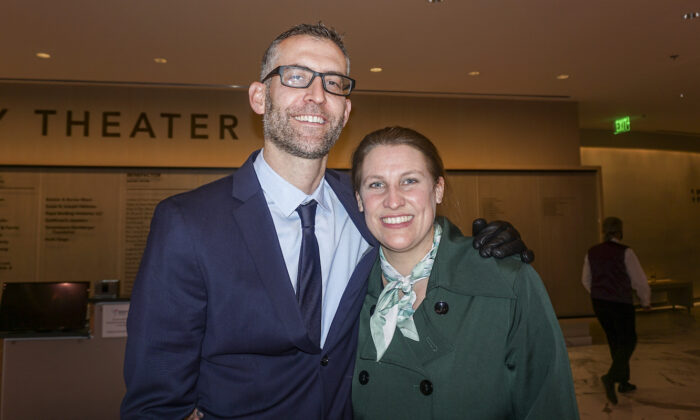 GREENSBORO, N.C.—“It was fantastic,” said Thane Hisaw who was at Shen Yun Performing Arts with his wife, Ruth.

Shen Yun‘s rendition of China’s authentic traditional culture brought out exclamations of wonder and acclaim from the audience when it performed at the Steven Tanger Center for the Performing Arts in Greensboro, North Carolina.

Classical and ethnic Chinese dance and music impart cherished stories from China’s past, as well as modern-day events such as the repression of freedoms by the ruling communist regime.

“The music was great …  some humor and some tragedy. [It] was just really enjoyable. We had a wonderful time,” said Thane, a nationally-acclaimed pediatric dentist who has won two awards for his service to the community. His work has been published in the American Academy of Pediatric Dentistry.

Shen Yun’s mission is to revive China’s traditional culture which all but disappeared after the Chinese communist regime came to power in 1949.

Thane said he had learned from friends who had come from China that the regime was persecuting Christians and Falun Gong, an ancient spiritual practice.

Shen Yun was very educational, Thane said. He loved the mini-dramas in which dance is used to portray a story or moral from China’s past.

“I would say I’m a romantic—so I love the boy meets girl stories. So, I liked, “300 Years in One Day,” and also …  the [drama depicting] the organ harvesting [‘Insanity During the End Days’] was very touching,”  he said.

Thane was aware that [illegal] organ harvesting crimes have been happening in China. “I was glad they were brave enough to touch on that real human rights issue,” he said.

“Insanity During the End of Days,” depicts the courage of Falun Gong adherents, who are persecuted for believing in truthfulness, compassion, and forbearance in China, and how their vital organs are stolen to supply China’s organ transplant industry.

Shen Yun was awesome, said Ruth Hisaw, explaining that she had been a ballet dancer until she was 18. “I didn’t realize that some of the ballet components come from traditional Chinese dance, that was really neat to learn,” she said.

Ruth loved the traditional dancing, the costumes, the colors, and the facial expressions of the dancers and their gracefulness.

“I also love that the women are … feminine and modest. They’re all covered up but beautiful,” she said.

She lauded Shen Yun’s mission to educate people about “China before communism.”

Shen Yun also performs with a live orchestra that is a blend of traditional Eastern and classical Western instruments, achieving a unique sound. It’s musicians also present solo performances, one of which was the instrumentalist playing the erhu, or Chinese 2-stringed violin.

“That was so neat—like magical. This emotional fantasy—it makes me think of a different world,” Ruth said, amazed that just two strings could create such a rich melody.

“We’re Christians,” said Thane.  “So even though it’s a different religion, the values of compassion were great. Compassion and courage and hope—those are shared values.”

He also enjoyed the vocalist who sang “Heaven in this Lifetime,” a song that warns that “atheism and evolution are fraught with deceit,” according to the lyrics.

China was once known as The Divine Land in which mortal beings and gods co-existed. The ancient Chinese believed that their culture was passed down to people on earth by heavenly beings.

Shen Yun Is ‘A beautiful production’

Wilton Duke and his wife, Patricia, were also in the audience. Wilton is a retired judge.

“This is a beautiful production, very talented people. Beautiful choreography and music … And it is wonderful that … Chinese people in America wanted to show the historical culture of China. And they’re doing it in a beautiful, beautiful way,” Patricia said.

“I absolutely love it,” said Dr. Mae Moss, a general surgeon, who was also present in the theater.

“I had no idea the detail behind the dance, as I discovered tonight. And the stories they are telling just bring tears to my eyes,” she said.

The [persecution of Falun Gong] should not be happening, she said, and it is sad that the people of China cannot experience their own traditional culture.