Shen Yun’s Stories Are About Our Values, Says Interior Designer 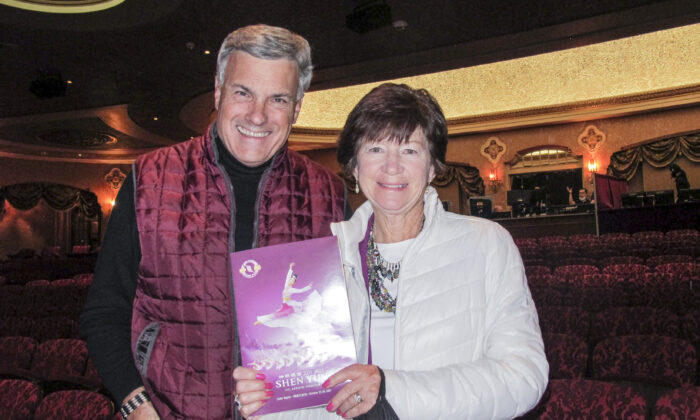 CEDAR RAPIDS, Iowa—Timothy and Kathy Meyer’s impression of Shen Yun Performing Arts was one of beauty. The couple had come to the Paramount Theatre in Cedar Rapids to enjoy Shen Yun’s revival of traditional Chinese culture on Oct. 23.

“Absolutely beautiful, lovely evening,” Timothy, the owner of an interior design company, said of the performance. “The talent is amazing. It’s so well put together.”

Kathy, a grade teacher, said, “Such tremendous dancing and movements, and the beauty was just wonderful, and the calmness is so nice. I think anyone who is interested in dance would love [Shen Yun]—children would love to see it.”

Besides depicting stories from China’s many dynasties and legends, the dances also portray the values from the divine origins of China’s traditional culture, including that of Buddhism, Taoism, and Confucianism.

“I think the story is so impressive when it’s about our values,” Timothy said. “It talks about what atheism does to the soul … There’s so much beauty and we just have to hang on to what we know is true and right, honoring our God, whoever our God is, at the top.”

“And it’s like the world is just heading in the wrong direction … trying to destroy the values that have made this world what it is. And now we’re trying to take it someplace else, so to hang on to our true values is beautiful,” he added.

Shen Yun Made Me Feel ‘I was part of the story’

Doug and Jill Beardsley were also amazed. Doug, a retired public health worker, explained that he and his wife had met during competitive ballroom dancing. They had both also been part of community and musical theatre.

“It was wonderful. It’s just a lovely show for anybody. I have never seen anything like this on stage,” Doug said. “They are athletes, but they are performers. I couldn’t take my eyes off them. I was part of the story.”

Jill, who has also done ballet and other dance forms, described the performance as “top quality” and “extremely well done.”

“Everyone is an extremely talented performer. Everyone’s performing skills, shining joy. The energy that they were exuding was very powerful,” she said.

The intensity of movement, the stability, the precision of the dancers’ lines all impressed Jill.