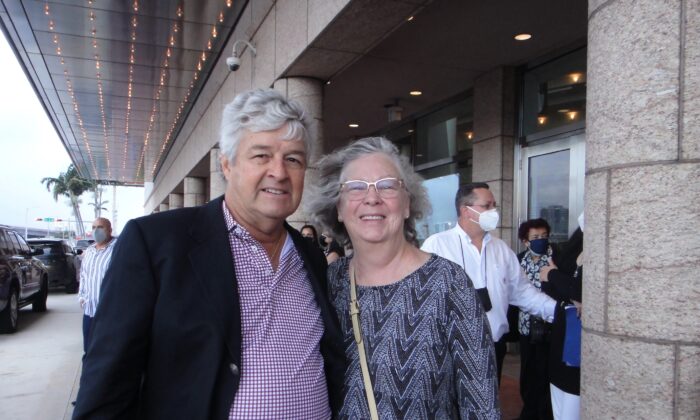 “It seems like it put you in touch with your inner spirit,” he said. Ms. Moore and his wife, Lynn, are owners of Air Alliance Inc., a company that manufactures and repairs parts for aircraft.

He explained that he was working on some health problems and was already addressing his spiritual side. After watching Shen Yun, he felt he was in a “different place and a better place.”  He had felt energy exuding from the stage. It was very relaxing and now he was going out to look for the music he had just listened to.

New York-based Shen Yun’s mission is to revive China’s five millennia-old culture in its authentic form. It presents classical Chinese and ethnic dances to portray stories that are the foundation of China’s spiritual and historical culture.

“I felt [an] uplifting spirit. It was like the Universe was talking to you. And the motion, the smoothness, [Shen Yun] was so well choreographed. Everything went together so well.”

For Ms. Moore, Shen Yun was a beautiful experience that everyone should see.

Shen Yun is accompanied by a live orchestra that is unique with its combination of classical Western and traditional Chinese instruments.

Ms. Moore was enchanted by the music and was particularly fascinated by the rendition of the erhu, the Chinese two-stringed violin.

But she also found it sad that it could not be seen in China. Although it can be seen in other countries, Shen Yun has been banned from performing in China by the communist regime due to a decades-long attempt to destroy China’s traditional culture.

At the heart of China’s traditional culture was a deeply held belief in the divine. It was believed that the Chinese culture was a gift that came from heavenly beings. In fact, Shen Yun showcases China’s semi-divine culture.

You can feel it came down from heaven and it is very spiritual.
— Lynn Moore

“I think I can feel that. You can feel it came down from heaven and it is very spiritual. I think it’s amazing and beautiful. And it should be continued,” she said.

“[Shen Yun was] like the universe talking to you—the rhythm, the flow,” she said. “I think it is spiritual. I think it reaches to your soul.”

‘We are absolutely loving it’

Also in the audience was Jill Farrell who is the Dean of the School of Education at Barry University. Farrell’s grandson, Jack had seen Shen Yun advertised on television and wanted to see it.

“We are absolutely loving it,” said Ms. Farrell. “The costumes are incredible. The dancers are so talented.” She added how she and her grandson loved the stories that were all about ancient culture.

The quality of Shen Yun was incredible, she said. “I’m loving the graphics, the visuals, the way the dancers seem to fly into space and then come back. It’s very well done.”

She was sad that Shen Yun could not perform in China. “That was really a surprise shock to me.”

Ms. Farrell practices yoga, meditation, and mindfulness. Shen Yun very calming, she said, and compared it to meditation in motion. She could also feel the energy that was emanating from the stage.

“I have an art background, so, anything that is so visually appealing … not only gives me energy but it just makes me feel better. It’s just absolutely beautiful: the costumes and the dancing, and they’re so talented.”