Shen Yun’s Message Is Important to Save the Free World, Says Executive Director 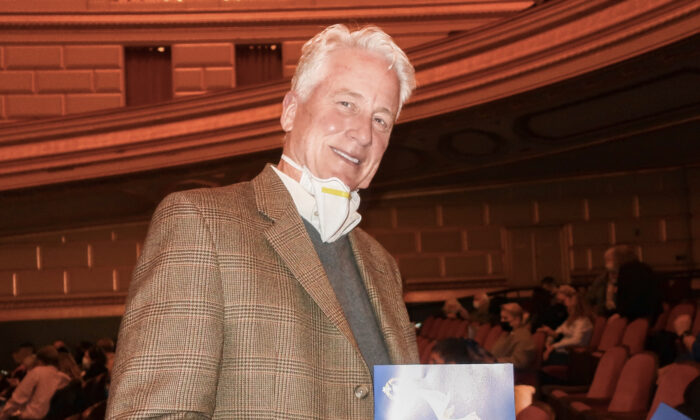 SAN FRANCISCO—Shen Yun Performing Arts has a very important message. There is another side to the wonderful Chinese people that people need to know, John Mitchell said.

Mr. Mitchell, an executive director of Arden Wood, had come to see Shen Yun at the War Memorial Opera House in San Francisco with his wife and daughter. His daughter, who is adopted, was born in China, and Mr. Mitchell felt it was important for her to learn about her heritage.

“It must be said that … the history of the Chinese people is not represented by the communist government. I think the message of spirituality is very important, given the aggressive communist thought,” he said.

Shen Yun, based in New York, presents China’s authentic culture through storytelling via classical Chinese dance, through music, and through folk and ethnic dances.

The storytelling dances depict legends and myths as well as modern-day events—such as the ongoing persecution of the spiritual practice of Falun Gong. Falun Gong is based on the tenets of truthfulness, compassion, and tolerance and was hugely popular in China for the health benefits it conferred on the Chinese people.

Mr. Mitchell lauded the majesty of Chinese culture and expressed his enjoyment in watching the performers.

“Just the magnificence of the dance and the proud traditions that cannot be taken away, that are inherent for thousands of years, and that’s the goodness and the quality of the Chinese people.”

Shen Yun was plainly a threat to the Chinese regime, Mr. Mitchell said. While he was grateful to live in a free country, it was important for people to be alert to what was happening in China. In fact, Shen Yun’s message is a good way of countering the challenges posed by the seemingly powerful communist regime, he said.

“I think communism is a great threat to our world today. And it comes in many different forms, and we’re not quite seeing the full picture yet. We’re seeing it more of it in our own country, which is very frightening—the subtle and not so subtle influences of communist thought.”

Shen Yun’s dances depict stories from the teachings of the schools of Buddhism and Taoism that illustrate the benefits of virtuous living.

“We have a divine creator. We have a loving God. And that story needs to be told, and it cannot be quashed by materialistic domineering thought,” Mr. Mitchell said.

“I think we are all God’s creation. I’m a Christian, and very much believe that’s the principle of what created this great nation, the United States, and we must be very zealous in supporting that. Otherwise, it will be taken away.”

Shen Yun’s message is relevant to everyone, not just the Chinese people, he said.

“We have to look beyond the lures of materialism and all the shiny things that catch our attention and distract us from the fact that we’re created by God and have a divine origin.”

Mr. Mitchell recognized that people, in general, failed to understand the danger of communism and for that reason he encouraged them to see Shen Yun.

“I think that it’s much more dangerous than we can even comprehend.”

Also attending the performance this evening were Lydia Kou, vice mayor of Palo Alto, and John St. Clair, a real estate broker. They were watching Shen Yun for the second time.

The folk dances brought back fond memories for Ms. Kou, who once lived in Hong Kong, and watching Shen Yun dispels the worries that are very prevalent at this time, she believes.

Ms. Kou and St. Clair are Catholics and believe “that there’s a greater being watching out for us,” she said.

Mr. St. Clair was effusive in his praise of Shen Yun. “I love the costumes. I love watching the dancers, how they move …  the choreography. I love everything about it.”

His consternation was raised by the mini-drama, “Insanity During End Days.” This dance tells the story of Falun Gong practitioners who, because they refuse to renounce their beliefs, are being murdered for their organs by the Chinese regime. Their organs are supplied to China’s organ transplant hospitals.

“I was a little bit disturbed by the police hospital and that whole scene …  what’s going on, the persecution of people because of religion. That’s not right, that shouldn’t be happening,” he said.

“I love everything about [Shen Yun,]” he declared.

Story decided that watching Shen Yun was a great way to release the tensions that came with the pandemic. Yet Shen Yun portrayed  the reality of what was happening in China and the restrictions that the Chinese people were experiencing, he said.

“I mean the freedoms that we have here in our country compared to the restrictions that people have in other countries, and I’ve been to China before, it’s an eye-opener.”