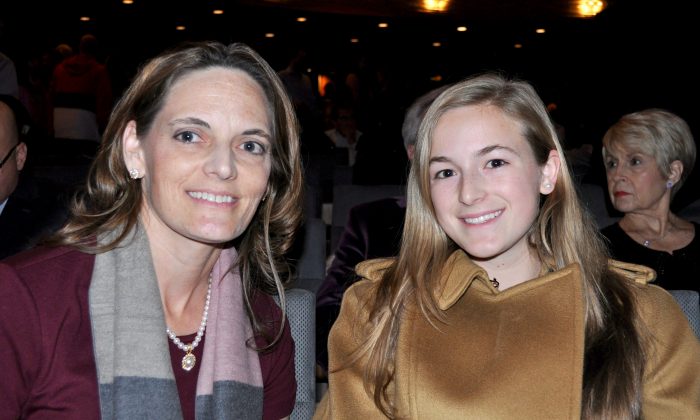 “The performance and skills and quality of this are unparalleled. Absolutely phenomenal,” Heather Carver said, after seeing Shen Yun Performing. Her daughter Katie enjoyed the performance at the Winspear Opera House in Dallas as well, on Jan.9, 2016. (Amy Hu/Epoch Times)

DALLAS—Heather Curtis was raised in a deeply Christian household with more than one minister in her family, yet she found the spiritual beliefs of traditional China as depicted by Shen Yun Performing Arts very consistent with the Christian faith.

“I think we have more in common in our different spiritual belief systems … than I think most of us understand or know,” and she appreciated being able to grasp her realization through watching story-telling dances. She could see the commonality of the beliefs in what was expressed on stage.

Traditionally the Chinese people believed that culture was bestowed to humankind by gods. New-York based Shen Yun travels the globe every year bringing that divinely inspired culture to the stage through music and dance.

“Mortals and divine beings merge on stage as one,” the Shen Yun website says. “Principles such as benevolence and justice, propriety and wisdom, respect for the heavens, and divine retribution, all come to life, washing over the audience.”

The financial manager attended the company’s performance on Jan. 9 at the Winspear Opera House with her two children. Her son, Steven is taking Chinese in school and his teacher recommended the performance.

In fact, for the ancient Chinese, art embodies the divine spirit with the aim of bringing humankind closer to it. The art of classical Chinese dance is particularly suited to this task as a key component of the dance system is something called “bearing.”

Ms. Curtis explained that her family enjoys the arts of all kinds, and having lived in Western Europe, they have had the chance to see many different forms of art. She felt blown away by Shen Yun’s dance.

“The synchronization, the details, the perfectionism, the unison performance is beyond amazing,” she said. “The flexibility, the conditioning, they are not even breathing hard. It is very impressive,” she said.

Ms. Curtis loved the sense of humor and story-telling in the dances.

Again the idea of bearing comes into play. Classical Chinese dance is known for its tremendous expressivity. As bearing emphasizes the internal quality of the dancer, it necessarily allows for nuanced characterization, and thus the means to tell stories.

The dancers’ inner states, reflections, peculiarities, and above all cherished principles of high moral character can be expressed through this art form.

“I come from the fine arts background and I have not seen this before. It is beautiful. I am definitely going to recommend it for people to see,” Ms. Curtis said.

With reporting by Amy Hu and Sharon Kilarski