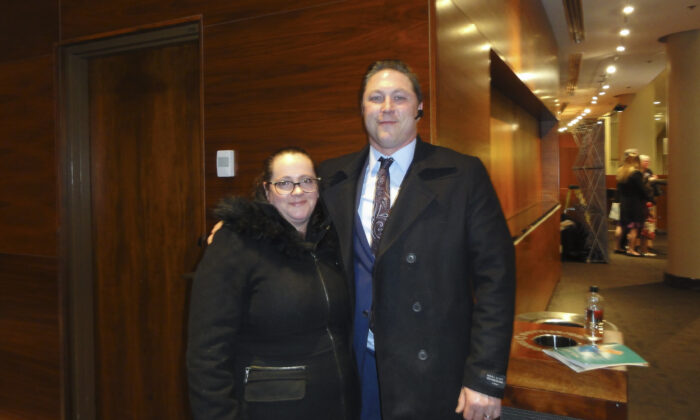 CALGARY, Alberta—Long ago, singers in China and Europe sang with especially pure and beautiful operatic tones thanks to an ancient bel canto technique that was almost lost to history. Today, Shen Yun Performing Arts has brought back this singing style to the delight and amazement of theatergoers around the world, including in Calgary, Alberta, where business owner Jay Wilson and his wife Rachel appreciated Shen Yun’s soprano and bass soloists on the evening of March 9, 2020.

“They did an excellent job. It was very nice,” Jay said, praising the singers and adding that their performances, along with the dancing and movements, were very beautiful. Jay attended the performance with his family at the Southern Alberta Jubilee Hall.

“I enjoyed it,” Jay continued. “Yes, [Shen Yun] was very good. It was entertaining and fun to watch, and it also provided a little insight into some of the cultural differences between Canada and China.”

In its effort to revive China’s 5,000 years of history, New York-based Shen Yun presents around 20 vignettes in each one of its performances. With classical Chinese dance as its medium, Shen Yun transports audiences through ancient legends and stories, traditional ethnic and folk dances, and also includes solo musical performances. Between each number, emcees give brief insights into the Chinese characters and culture that Western audiences are about to see.

Rachel appreciated the consideration the emcees paid to their Calgary audience.

“I like the narrative part of it,” Rachel said, “so that [it] helps you understand the stories behind what they’re trying to convey. Because … we don’t know, me personally, I don’t know a lot about the Chinese culture. Meanwhile, you look at the world and you just have assumptions of what a culture can be sometimes, right? So, I think it just, it was eye-opening a little bit.”

The performance altogether made Rachel feel happy, and her husband Jay feel uplifted.

One reason that many audience members report feeling uplifted and even enlightened lies in a story in the performance when Shen Yun depicts the ancient Chinese legend of the Creator bringing souls to earth and rewarding those who are kind and good.

While Rachel didn’t immediately recognize the cultural story, she expressed interest in wanting to know more about it.

“I think that’s, that’s just something that I would look into. But the performance was so vibrant. I enjoyed it,” she said.

Her favorite pieces of the evening were two of the female cast’s dances that portray the colorful, ethereal beauty of ancient Chinese ladies: “Water Sleeves” and “Lantern Grace.”

“The dresses just lit up the entire stage, right? So, it was pretty amazing,” Rachel said. “There was so many!” that she enjoyed, she couldn’t really choose a favorite.

The couple attended the performance with three other family members that evening, and said they would give glowing praise about Shen Yun to those who didn’t yet see it.

To Rachel, Shen Yun was “vibrant and elegant,” while Jay said he would describe it to others as “entertaining and enjoyable.”

Shen Yun Performing Arts will perform in Canada at the Southern Alberta Jubilee Hall through March 10 before moving on to the Queen Elizabeth Theater in Vancouver beginning March 13.