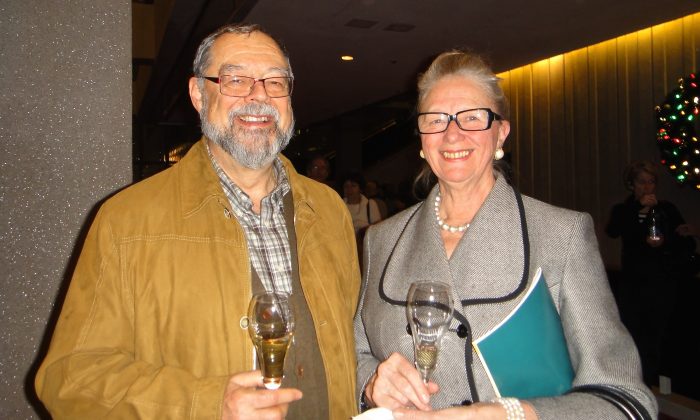 MONTREAL, Canada—Shen Yun Performing Arts’ revival of traditional Chinese culture was front and centre at Place des Arts in Montreal on Jan. 8, for the second of six shows in the city.

“We enjoyed it very much indeed,” said Jocelyne Dionne, vice president and investment adviser with CIBC (Wood Gundy) in Montreal.

“I like it very much, too,” said her companion, Mario Beaulieu, a dental surgeon.

Ms. Dionne said she enjoyed every aspect of the performance, which features classical Chinese dance and ethnic and folk dances, a live orchestra, groundbreaking animated backdrops, vocal soloists, and an erhu virtuoso.

“I think the colours, the stories, the message, the scenery, the background, the music—everything is very good. It’s very peaceful, relaxing, and soothing. Very nice,” she said.

“I feel good, yes indeed. Looking forward to seeing the last part of the show,” she added.

“Very relaxed and composed, and after we expect more of the same,” said Mr. Beaulieu.

Shen Yun tours the world each season showcasing the essence of China’s traditional culture. According to its website, its mission is to revive this culture, which was all but decimated by the Chinese Communist Party through various destructive campaigns—most notably the Cultural Revolution, which lasted from 1966 until 1976.