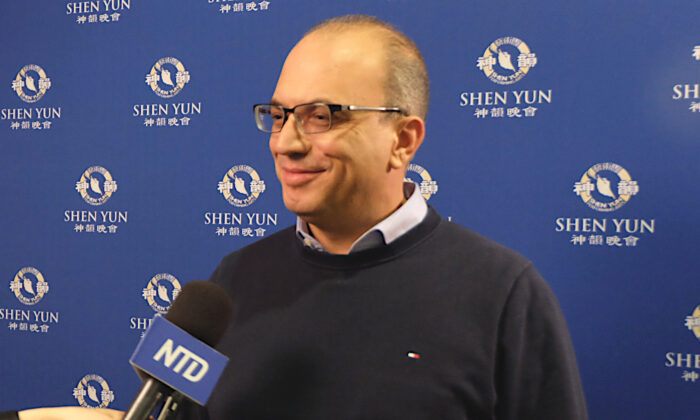 Motaz Sabri is the vice president of Bunzl Canada, a grocery, retail, and food processor based in Ontario, who attended the Jan. 11, 2020 evening performance.

“I think it’s amazing. It’s so great to see the colors, the music, and the dancers. The harmony is something amazing,” he said.

“The way they operate and they work together—it’s amazing. I think they put a lot of training behind it, so it’s really an enjoyable show for sure.”

Harmony can be created from two simple notes, or out of a vast number of components. New York-based Shen Yun falls into the latter, with audience members regularly citing numerous aspects of the color-filled show as impressive.

“The light, the colors, the harmony between the background and the clothing they wear is something really, really fun to watch.

“The music, even the singing is something I haven’t heard before. It’s something new, something amazing, authentic,” Sabri said, adding that the soprano of the evening was very good.

“The opening dance piece sets up that the quality of the show is amazing. So from the first dance, you can expect more. And every dance afterwards, they elevate the bar. So it was really, really good.

Professional Pianist Rates Shen Yun a 10 out of 10

Professional classical pianists understand the power of harmony better than most. Maciej Dorna is one such pianist who had glowing praise for Shen Yun’s unique orchestra and blending of Eastern and Western musical traditions.

“Ten out of ten so far. I’m enjoying myself thoroughly. The orchestra is very good. I love the Chinese instruments. I think they’re beautiful,” Dorna said, who recently returned from performing in Europe.

Shen Yun utilizes Chinese instruments such as the pipa, erhu, and dizi to punctuate and enliven its live orchestras. Each of the seven touring groups is accompanied by its own orchestra.

“How do I describe the sound between the two? It’s a very clean, authentic fusion,” Dorna remarked, about the blending of musical traditions from the East and the West.

“I love the cultural essence of it. I think this is what I came for. … I think they’re doing an incredible job, from New York to bring the culture to people,” Dorna said.

Shen Yun’s mission is to revive China’s authentic culture and share it with the world. In doing so, they depict the culture’s deeply spiritual beliefs in addition to art forms that were once almost lost.

“I hear the East and the West, I hear how they’re both performing together, but they’re very in harmony with each other, and I like that. And I like how the music goes with the dance. I think everything worked really well as even the animation of the characters would come out of the animation and become alive. I think that was a beautiful way to make it so authentic,” Dorna continued.

“I like how they choose the strong with the masculine dancers and the feminine with the female dancers. It’s very important to understand the differences in strengths and abilities and beauties,” Dorna said. “I think that’s a beautiful thing, and I’m glad they’re doing it because it gives people an opportunity to understand a little bit of the culture more in-depth.

“When the ladies were out, everyone felt beautiful, and the lights, and it was just really nice. And when the gentlemen came out, you could hear the strength of what they were trying to embellish. So I enjoyed that,” Dorna said.

With reporting by NTD Television, Dongyu Teng, and Brett Featherstone.