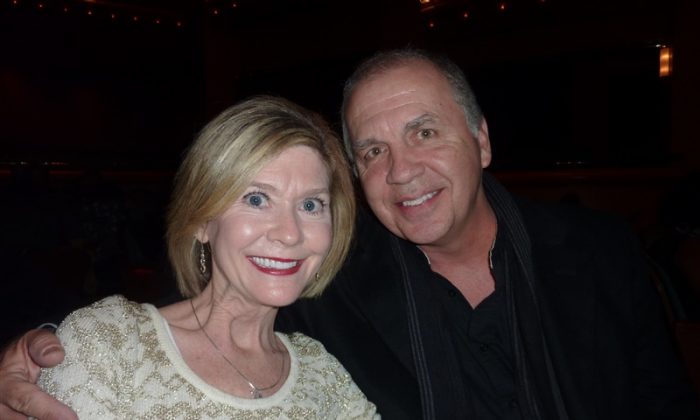 Will Greiner and his wife, Gail, attend Shen Yun Performing Arts at the Aronoff Center for the Arts, on Feb. 27, 2015. (Valerie Avore/Epoch Times)

CINCINNATI—”It’s been very well planned and coordinated. I love the professionalism of it—to see these [ dancers] perform so spectacularly is just a delight and we’re so enjoying the evening out,” said Will Greiner after seeing Shen Yun Performing Arts International Company on Feb. 27.

Will Greiner, a retired convention center manager and his wife, Gail, attended the New York-based company’s first of three performances at Cincinnati’s fabulous Aronoff Center for the Arts.

Although Mr. Greiner is now retired, his wife is not. She is co-owner of I Vacation Online.com, a vacation rental business. She had seen Shen Yun once before and because she found the experience so beautiful and moving, she wanted to share that with her husband.

Mr. Greiner’s general impression was that it was delightful. “It’s so wonderful and we are thoroughly enjoying it,” he said.

Seeing Shen Yun now for the second time, Mrs. Greiner still found it absolutely beautiful. When the curtain first opened she was immediately drawn in by a sense of awe. Being moved by the beauty and the passion, she felt it touched her on a spiritual level.

She said, “I can see the compassion, the openness, the tolerance, the hope for peace, acceptance, the unity, and I think they are drawing the audience into that.”

“There’s a message in every dance, and a story,” Mr. Greiner commented. He paid particular notice to one dance The Power of Compassion in which “they show how you can turn people around by being kind to them and showing goodness.”

“My wife says all the time, ‘There is goodness in everyone,'” he added. “And when you see how they portray [that] in that dance, how they found the goodness in that young man and brought him around … It was a good message.”

Mrs. Greiner agreed and noted the correlation with modern times. “There’s great persecution going on today, and it was expressed in the dance, but I do think that there is hope, and I think that we need to unify. We need to come together.”

The persecution depicted in The Power of Compassion that she refers to is that of the peaceful meditation practice Falun Dafa (also known as Falun Gong), a traditional Chinese meditative practice of mind-body-spirit that has been brutally suppressed by the communist regime since 1999.

Joseph Jones, IT Director for a small Australian company, also attended this evening’s performance. What impressed him most was that he didn’t know that the Chinese culture was so spiritual. “I had a preconceived idea that they were more atheistic, and I thought the old religions were dead and that there was not such a great spiritual need in China,” he said.