Shen Yun: ‘There Was That Feeling of Serenity’ 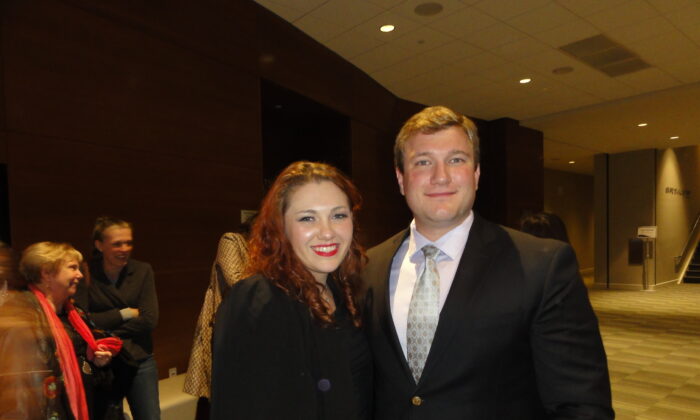 “Ten out of 10. I did not know what to expect but I was blown away … It’s breathtaking,” said Max Pitcairn, a graduate student.

Max and his wife Katherine Pitcairn, saw New York-based Shen Yun for the first time at The Long Center for the Performing Arts in Austin, Texas, on Jan. 31, 2020. Not knowing what to expect, they were blown away by what they saw.

“It was absolutely phenomenal. I was shocked. I didn’t know what to expect but it was so much better than what I could have expected! They were all wonderful,” said Katherine, who works in digital marketing.

Max said that he and his wife were Christians, and for this reason, Shen Yun’s messages really hit home for them. Max saw “rebirth, new life, new beginnings, forgiveness”—values from ancient Chinese culture that he felt close to himself.

China was once known as the Divine Land and Shen Yun seeks to bring that divinely inspired culture alive. The opening scene of Shen Yun depicts the Creator coming down through the cosmos, calling upon the heavenly beings to descend to the mortal world with Him. First arriving in China, they begin to impart divine culture to man in the form of an emperor and his dynasty.

The final piece brought back similar themes, which Katherine loved.

“It helped bring everything together. I think at first it’s kind of sad, the persecution, but at the end, there was hope that there’s something more, and it’s coming all together at the end,” said Katherine.

The final piece portrays practitioners of the spiritual discipline, Falun Gong, being persecuted in modern-day China by the Chinese Communist Party (CCP). Because of their unshakable faith, and devotion to following universal values of truthfulness, compassion, and forbearance amidst the hardship, a profound miracle happens.

“So, it’s uplifting. It felt graceful. And just relaxing. There was a flow to it that kind of made you stop and think and not worry about everything else, and there was that feeling of serenity, of course, I love that,” Katherine said.

Max said this piece reinforced the idea that if you keep strong, keep true to what you believe in, and look after your fellow man, there’s something [good] waiting for you at the end of the road.

Not knowing anything about the spirituality or culture of the ancient Chinese, Max felt that seeing such a spiritual performance in the US was inspiring and “a big treat.”

“It made me feel good about myself,” he said.

Seeing it for Yourself

Max had a message for those who haven’t yet seen Shen Yun:

“[It’s] mind-blowing. Don’t believe what you read online. It’s not what people put online. They don’t understand it. They don’t have background knowledge of it. They fear what they don’t understand. Go in with an open mind and you’ll be blown away by the costumes, choreography, the dancing, the background, story—everything was a 10/10. I would tell people, just go, you have to see it,” said Max.

Max was referring to some articles that have been circling online, written with skepticism of Shen Yun and it’s connection to the spiritual discipline, Falun Gong.

Because Shen Yun sheds light on the persecution of Falun Gong in China through its performances, as well as showcases the authentic Chinese culture that was almost entirely destroyed during the Cultural Revolution, the CCP has been trying to block Shen Yun from performing since its inception. The CCP has used multiple tactics to try and sabotage Shen Yun’s performances. This includes slashing the tires of their tour buses, threatening theater companies, and having people pose as Falun Gong practitioners and write letters containing “delirious, nonsensical content” to give a negative impression to theater companies.

Articles written with negative and skeptical views of Shen Yun often contain content that can be found on Chinese Embassy websites, where the CCP urges people not to see Shen Yun.

Shen Yun’s website states that despite employing these multiple tactics, the CCP has been unable to stop the performances. Shen Yun now has seven dance companies touring the world simultaneously, performing in over 100 cities every year—with most shows sold-out.

With reporting by Sophia Zheng and Grace Coulter.