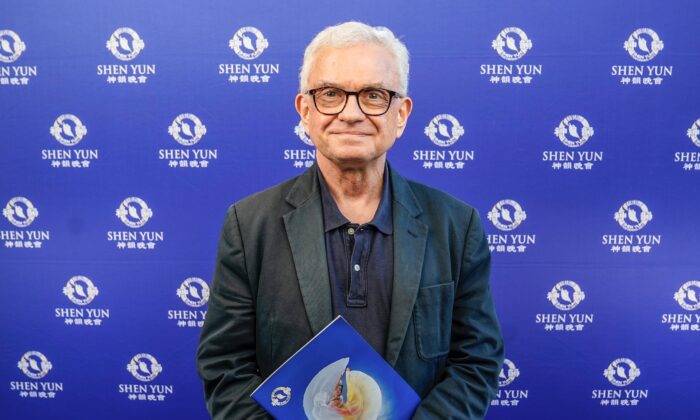 SYDNEY, Australia—Shen Yun is “a tremendous display of artistic virtuosity,” said Peter Kurti, director of the Culture, Prosperity, and Civil Society program at the Australian think tank The Centre for Independent Studies.

Mr. Kurti, who is also a published author, a TV commentator, and an adjunct associate professor at the University of Notre Dame Australia, came to see Shen Yun at the Sydney Lyric Theatre on April 10 with his wife, Linda Kurti, founder of a social research company.

Mr. Kurti praised the show, which features classical Chinese dance, as a “technically accomplished and colorful, dramatic presentation of an ancient religious and national tradition.”

I thought that Shen Yun, expressed that extremely well, and in a very powerful way.
— Peter Kurti

“What I think is really important and impressive was this communication of tradition. And conveying to a contemporary audience … that tradition is important, and that tradition defines who we are,” he said. ”I thought that Shen Yun, expressed that extremely well, and in a very powerful way.”

The New York-based company was founded in 2006 by a group of Chinese Americans who were united under the mission of reviving the traditional culture of “China before communism” through the performing arts.

This theme is woven throughout Shen Yun’s dance stories, which Mr. Kurti said conveyed “ancient religious truths and principles, that human nature hasn’t changed, and that human nature is confronted by good and evil.” He also found in them an “enduring” message of hope during times of adversity.

Those stories helped the audience understand “how oppressive the communist regime has been” as well as the impact that the regime is having today on traditional Chinese teachings and values around the world, Mr. Kurti noted.

“This is a very important way of informing a Western audience about terrible things that are happening in China that are, frankly, very hard to believe because they are so far removed from the experience of life here in Australia,” the academic added.

It was not surprising to him that the Chinese government doesn’t want such messages portrayed. Shen Yun performs all around the world but is banned by the regime for touring in China.

“I am opposed to all forms of censorship,” he said. “I think that performing arts are just one example of the way in which truth is conveyed. And I think that people should be free to express themselves, whether in dance or in theater, in music, or in the written and spoken word.”

Reporting by NTD and Nina Nguyen.