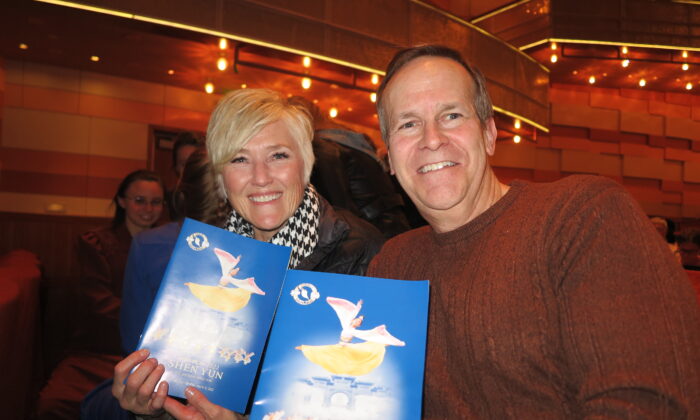 SALT LAKE CITY—There are many theories on how the universe came to be. Many belief systems around the world share the knowledge that the Creator was the origin of everything that we know of. Although Shen Yun Performing Arts portrays Chinese culture and civilization, their belief in the Creator resonates with audiences around the world.

“We have a deep and abiding belief in [the] Creator and God. So that he is in control and his love is everywhere,” said Kristi Sumner. She added that from Shen Yun she could sense “the spiritual message of hope and a belief in God and that the Creator is in charge.”

Ms. Sumner and her husband, John Sumner, the managing director of a Department of Defense Practice, purchased the best tickets to Shen Yun when they saw it advertised.

“We are all his children. And consequently, we are all brothers and sisters in that sense,” added Mr. Sumner.

After the Chinese communist party came into power, traditions were suppressed and destroyed. Shen Yun is based in New York, and its mission is to revive Chinese culture and civilization. Mr. Sumner shared his support for the company’s efforts.

“So very important and such a shame for what is being withheld from others by false teachings,” he said.”

Mr. Sumner added that seeing Shen Yun gave him “the understanding of the deep rich cultural heritage this represents. I really appreciate learning about that and all that thousands of years of Chinese tradition have to offer us in this day.”

Through music and dance, Shen Yun also raises awareness of the persecution of Falun Gong, a peaceful meditation practice that follows the principles of truth, compassion, and forbearance.

“I love that,” said Mr. Sumner regarding the principles.

“We all seek truth and sometimes it is not evident to us because we’re blinded by some of what is going on in our modern society. Forbearance, to continue to search for that truth. And compassion throughout to see others as people,” Ms. Sumner said.

Although Shen Yun touches on serious topics, they do so through beautiful dance and music.

“The dancing is excellent. The costumes are beautiful, such grace. Everything is just excellent,” Ms. Sumner said.

The couple added that they will definitely be telling their friends about Shen Yun.

“Definitely, we will spread it. It is so worth our time and we’ve been so pleasantly entertained and have loved it,” Ms. Sumner added.