Shen Yun Reminds Us To Return to Our Origins 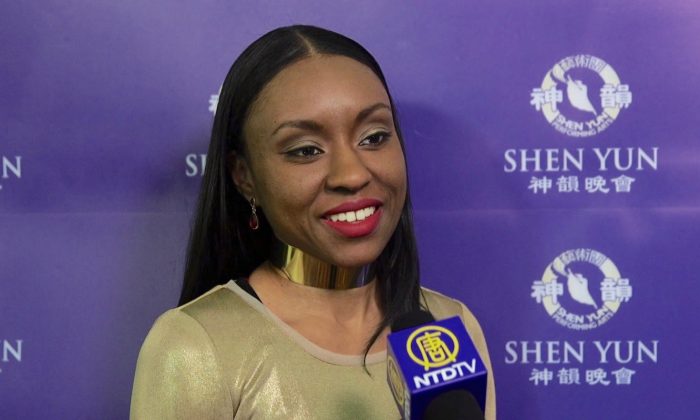 Brittany Thompson spoke to NTD Television about how much she truly enjoyed the spiritual message in Shen Yun's performance, at the Milwaukee Theatre, on Feb.21, 2016. (Courtesy of NTD Television)

MILWAUKEE—Brittany Thompson didn’t just like Shen Yun Performing Arts, she enjoyed the spirituality of the performance in a deeply satisfying way.

The graphic designer saw the performance by the classical Chinese dance company at the Milwaukee Theater on Feb. 21.

It was beautiful as far as the colors, the music, the synchronicity of the dancers were concerned, she said, but when the solo vocalists came out and she read the projected lyrics to their songs, then she truly enjoyed a sense of wonder.

The songs sung by classical singers, applying the famed bel canto technique, have titles like “The Moment of Salvation” and “What You Are Here for,” and “Path to Heaven,” and touch on the purpose of life.

In “Path to Heaven” the lyrics suggest that worry about one’s status, wealth, obsessions, enmities, all end in vain and obscure the real purpose of returning to heaven.

In fact, Shen Yun’s mission is to revitalize the essence of the divinely bestowed Chinese culture.

“I think it’s wonderful that this company’s trying to remind people to return to their essence of being divine beings,” said Ms. Thompson, because other artistic ventures rarely do so.

Using classical Chinese dance, the company presents stories that explore ideals such as truthfulness, reverence for the heavens, and respect for nature.

Ms. Thompson appreciated how the artists were able to express their messages through the dance and through the music—without any words at all.

And the main message she felt was: “Just that we have to go back to our origin, which is the divine, and that you can’t stray away because that’s not good for you. … You do come from a divine being, you’re part of the supreme God here, so you have to be reminded of that so you can keep your thoughts and actions in line with what the Creator willed us to do,” she said.