Shen Yun Provides ‘A Sense of Hope’ for Anyone Who Needs It, Says Theatergoer 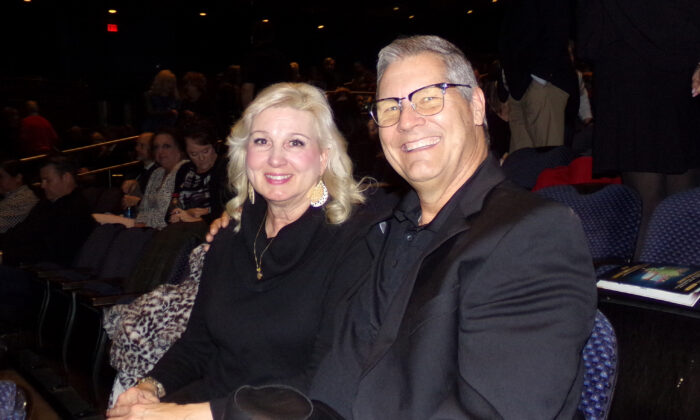 OKLAHOMA CITY, Okla.—Alan Hoffhines, a distribution manager, watched Shen Yun Performing Arts with his wife, Kathy Hoffhines, at the Civic Center Music Hall on Jan. 21. The couple enjoyed the performance and were appreciative of the opportunity to learn about Chinese culture through the universal languages of dance and music.

“I’m really enjoying it,” said Mrs. Hoffhines. “I enjoyed the way the dancers tell the story with such an emotion. We don’t speak Chinese, but we know what’s going on.”

Based in New York, Shen Yun was founded in 2006 by leading Chinese artists, who made it their mission to revive traditional Chinese culture through classical Chinese dance and music. According to Shen Yun’s website, China was once known as “the Land of the Divine,” and the Chinese people believed that their culture came from the gods. Traditional Chinese culture was founded on the spiritual teachings of Confucianism, Taoism, and Buddhism, which were abolished when the Chinese Communist Party took power in 1949.

When asked about what he thought about Chinese culture’s connection with the divine, Mr. Hoffhines said, “Oh, my gosh, it gives hope. It provides hope, through incredible adversity, and especially in China, I didn’t really understand [that] old Chinese culture was so closely linked to the divine until I read about Shen Yun. I understand now … about the oppression that the communist government places on the Chinese people, and I just pray that someday the communist regime will disperse and be overtaken with traditional Chinese culture.”

Shen Yun’s website states that something that makes Shen Yun’s performers unique is that they “strive to live by the principles of truth, compassion, and tolerance” and that they “believe that cultivating the heart is the way to create art that is beautifully sublime.” Mr. Hoffhines said that he had read about this, and was eager to find out for himself how it felt to watch Shen Yun’s performers on stage.

“That’s one of the things that intrigued me about the performance,” said Mr. Hoffhines. “I told my wife about that, and said, ‘You know, I would like to see what impact that has on us, just observing the beauty and the emotion and the purity of what they’re portraying on stage,’ and it’s heartfelt inside. It’s a wonderful thing.”

Mr. Hoffhines said that he would “recommend the show to just about anybody that feels that the world is going in the wrong direction, and would like to have a sense of hope.” He also recommends Shen Yun to those who wish to “understand what Chinese culture has gone through over the since the communists have taken hold of the country and how they [Shen Yun] continue to fight and try to regain and uphold their cultural beliefs of the past.”

“I think anybody that wants to have hope for world, you can get that from the Chinese performers that are portraying that on stage.”