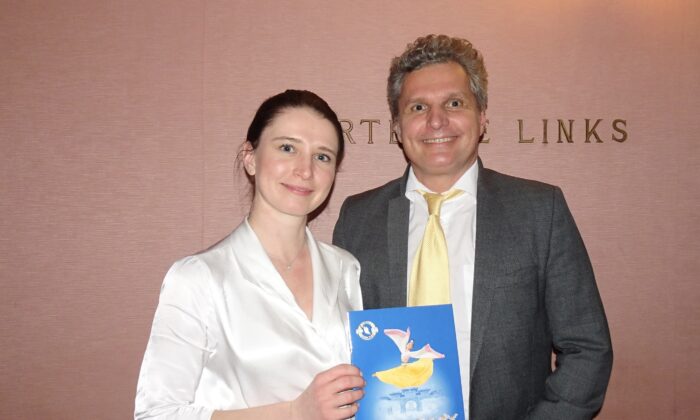 SALZBURG, Austria—The pandemic has had a huge impact on the world and people are ready for it to be over. However, some feel that the virus has not been all bad and may even be changing the world for the better.

After attending the matinee performance of Shen Yun Performing Arts on Jan. 25, Dr. Martin Gollner, a doctor of traditional Chinese medicine, shared his opinion that the pandemic is not a regular virus. Perhaps there is more to it than meets the eye.

He shared that although he practices Chinese medicine, the performance introduced him to the concept of the divine in China which is something he thought did not exist in China anymore.

“I like that there is divine belief in China as well. I didn’t know that before and I’m a Chinese doctor in training and I’ve realized here today that the divine also plays a role in China and not only regarding the body,” Gollner said.

In Chinese medicine, it is known that the five elements are connected to the five major organs of the body. However, there is a spiritual side of Chinese medicine that has been lost after communism took over in China.

“This aspect is not mentioned in my training, it is always just wood and water … this element theory, but the divine is not. And that is new. And that communism has actually destroyed this world, that is also new. And today we have seen that tradition should return again, then China has a chance,” he said.

Shen Yun is dedicated to reviving the beauty and spirituality of China through dance and music. The couple found that there were great similarities in the spirituality presented in the performance and in their own Christian belief.

“Yes, that is very similar! So the Creator has come to earth—I am a Christian and so is my wife,” Gollner said.

He added that Shen Yun has shown him that although China has been taken over by communism and everyone places great importance on their electronics, the people there are still beings with their own thoughts and values. He shared his appreciation to Shen Yun for sharing that with the world.

“It’s great that Shen Yun is being carried all over the world because I think we might have a wrong image of China,” he said.

“We have the image that they are electronic people and that they are being guided by the regime—but they have a heart and a soul, exactly what is shown here. Every nation has its own traditions, its own dances and if you suppress that, it will not go well in the long run.”

Ticket As a Birthday Present

Charlene Kopansky was also in the audience for the afternoon performance. She received the ticket as a birthday gift and traveled from Munich to attend.

“It was full of color and the precision and the choreography was amazing as was the skill of each dancer and their ability to coordinate,” Kopansky said.

“There is a lot of liveliness in the performance and the physical fitness level was incredible,” she said. “The music was also very, very good.”

As someone who once did modern jazz dancing, she was impressed by the talent of the performers.

“So much energy—the jumps and the turns and the leaps and the interaction of the players,” she said. “Those dancing were also acting, so I thought that was very, very good and very animated.”

‘Stories Will Touch You’

Helmut Hahn, a hotel owner from Bavaria, was also in the audience. He said he was impressed by the diversity in Shen Yun‘s programs.

“The real beauty is the artistry of the dancers—how well they dance, how well they move. And the stories are very appealing as well,” Hahn said.

“You can’t imagine beforehand that the stories will touch you so much, there are always different ones. You think, when you’ve seen one, there can’t be much else but something else comes up,” he said.

“It is very diverse and that’s fun. I’m very excited.”

Hahn also remarked on the performance‘s efforts to present goodness in humanity, adding that he would like to have his children experience Shen Yun as well.

“I think it comes across very well… You can tell that these people have feelings. And that’s actually the most important thing, that’s what gets lost quite often,” he said.

“Importantly, I will put in the effort so that my children come and see it for themselves.”