Shen Yun Performance Is ‘Expressing at the Highest Level Possible’ 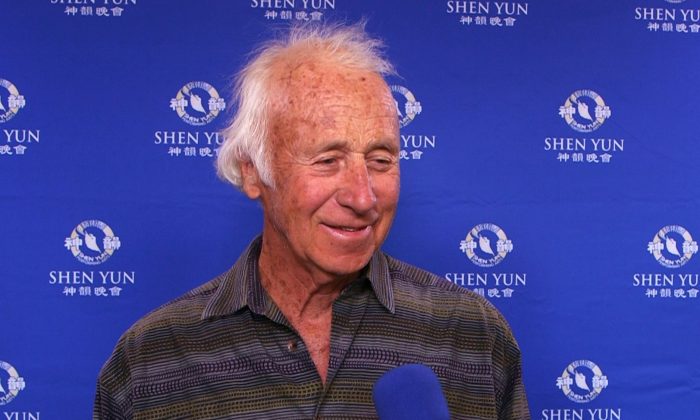 John Leinau said he felt privileged to be able to see Shen Yun Performing Arts at the California Center for the Arts on Jan. 27, 2016. (Courtesy of NTD Television)

ESCONDIDO, Calif.—The traditional Chinese culture was passed on continuously for 5,000 years, and then in just the past few decades nearly destroyed. Today Shen Yun Performing Arts has brought it back to the world’s stage through music and dance, and audience members from all cultures, backgrounds, and walks of life find it is something that resonates with them personally.

The performance was about freedom for Mr. Leinau.

“All over the planet, people want this freedom. And no one will know true, deep happiness until we’re all allowed to express freely, without harming and hurting one another,” he said. To freely express and not harm others was what he felt Shen Yun truly understood.

“All of it is inspirational to me,” he said. “Every single one of the performances is just unique and perfect in itself.”

Shen Yun mainly performs classical Chinese dance, using it as a base for the ethnic and folk dances of China’s many minority groups. The program also often includes solo performances from bel canto vocalists or an erhu virtuoso.

For Rose Davis, publisher of the Indian Voices Newspaper, the performance was a remarkable one.

Ms. Davis publishes a paper that is a voice for the indigenous peoples, and felt Shen Yun’s performance had the power to sort of magnify that essence.

She was amazed by the cultural dances and the ability of the artists to communicate so much—5,000 years of civilization—without words.

“It was very enriching,” she said,

Audience members Lisa and Hbiben Abante, originally from the Philippines, felt it was an eye-opening experience they’d like to experience once more.

“I’d like to see this again,” said Mr. Abante. “It’s good to see people watching something that creates atmosphere of love and oneness and unity … I will definitely see this again.”

The couple said they felt it encompassed China’s whole history, from ancient times to the modern day. An ultimately, it was about “showing love to one another” and creating oneness, Mr. Abante said. “It’s about God, about the Lord, and being in one peaceful world.”

The oneness, and unity, the music. Everything is just in one accord.
— Hbiben Abante

“The oneness, and unity, the music. Everything is just in one accord. So I believe this is really great,” he said. “It’s a beyond beautiful experience. I’ll do it again.”