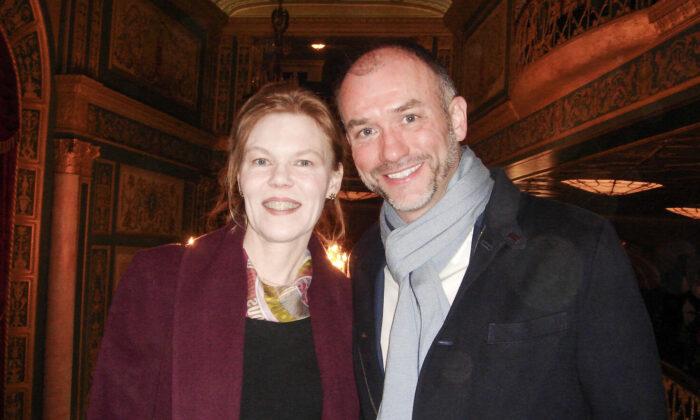 DETROIT—Greg and Lauren Barton visited China last spring, and a performance at the Detroit Opera House brought the landscapes they had seen to life.

“Seeing all the backdrops of the temples and the lakes. … It was fantastic to see all of that—in a musical setting,” Mrs. Barton said after attending Shen Yun Performing Arts World Company’s matinee performance on Jan. 19, 2020. at the Detroit Opera House.

The couple both work in real estate development, and Mr. Barton is also co-founder and partner of a financial group.

New York-based Shen Yun is the world’s premier classical Chinese dance and music company. According to the website, “Shen Yun was established in New York in 2006 by elite Chinese artists. They came together with a shared vision and passion—to revive the lost world of traditional Chinese culture and share it with everyone.”

Mr. Barton’s overall impression of the performance was that it was fascinating. “Just the color, the pageantry, the professionalism. It was beautiful,” he said. The uplifting nature of the spirituality of the culture shone through in the performance and added a unique dimension to the art.

“The elements of the spiritual, the arms, the colors changing, the scope, the depth of the people, the movements on stage. All of that was so awe-inspiring,” Mr. Barton commented.

“They did a great job of emoting the stories so you don’t need words,” Mrs. Barton added. “You don’t need words to understand the story. I love the line that we’re all basically divine beings on earth. It was very meaningful to me. I think about how every person has something to teach us. Every person we meet has something to offer us. I love that sentence in the song, the opera singer, that was one of my favorite lines in the entire production. … There’s nobody that I meet that doesn’t have value equal to mine. It was fantastic that way,” she said.

It was a performance the couple would recommend. “The show is fantastic. It’s everything that we thought it would be and, again the pageantry, and the color, and the uniqueness. In the United States, you don’t see this traditional dancing as much as you would typically maybe see in Europe or in Asia. So it’s a great experience for anybody, all ages.

With reporting by Julia Song and Andrew Darin.