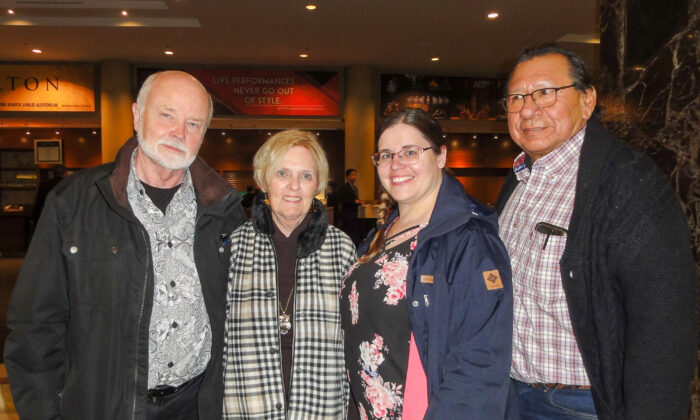 CALGARY, Alberta—Shen Yun Performing Arts has returned to Calgary and Alberta’s theatergoers are delighted. New York-based Shen Yun’s classical Chinese dancers and musicians brought their newest production for the 2020 season with them, which, if you ask retired judge Jim Langston and his friend, a social worker and bison rancher, Dan Fox, is a performance filled with athleticism, energy, and powerful legends.

“We were invited by our friends to come and see [Shen Yun], my wife and I, and I think we were overwhelmed,” Langston said. “It was beautiful. It was moving. It was extremely entertaining. Enjoyed it thoroughly, would come again.”

“It’s the songs and the dancing,” said Fox, who also teaches Native culture to non-Native people. “[Shen Yun] interprets a lot of legendary stories … That really touched me from this performance. And the athleticism that they showed through the whole—incredible athletes and the way they perform their dances.”

Fox drew a comparison between his own culture, the Blackfoot people of Southern Alberta, and China’s authentic culture that he saw in Shen Yun. He felt that both cultures contain important knowledge and heritage that get passed down through their stories, from generation to generation, but are at risk of being lost entirely.

Langston elaborated on what he enjoyed most about Shen Yun and spoke to how important he feels it is to embark on endeavors as Shen Yun has with its mission of revival.

“I would describe [Shen Yun] as being inspirational,” Langston added. “It’s beautiful. It’s a view into a different culture. … It’s a way of survival, of keeping stories and traditions and attitudes alive.”

“Oh, it’s absolutely essential. And I understand the message here goes beyond just the singing and dancing. And I think … this is the thread, the rope that binds what Chinese people are to the present day, and it’s been cut by politics. And so this is a way of restringing it, rethreading it, and getting that continuity back. And that’s essential because I think, like many other cultures, [Chinese people] have lost so much, and it’s important to remember who you really are.”

Fox’s wife, Jennifer, saw something similar in the performance: “I think it’s important to teach the future generations so that it’s not completely lost, so that it carries forward to the future.” The overall message she received from Shen Yun is that “the culture is important to hang on to.”

Jennifer is a veteran fan of Shen Yun. “It’s beautiful. I was here the first year it came to Calgary and so this is the second time I’ve come. I just think the message is important, and the dancing and the music is beautiful.”

New York-based Shen Yun’s mission is to revive authentic Chinese culture which was almost lost at the hands of the Chinese Communist Party. Unfortunately, that regime still continues a violent campaign to try to wipe out traditional Chinese culture and even tortures spiritual believers who want to follow in their ancestors’ footsteps. Shen Yun portrays this brutal persecution in some of its storytelling dances, and depicts the compassion and hope that these spiritual believers exhibit.

Shen Yun also includes references to the Creator, an ancient legend passed down in China that says He will one day return to earth.

“In our culture, we all say there’s only one, one higher, one higher power, and a Creator. And it was good to see that interpretation through the same way as the Chinese culture. Very powerful,” Fox said.

“I think the message that was being sent was that there was a lot of spirituality and culture back then and it’s still being carried on … through this show, and that’s like—like Jen said, it’s very colorful and very strong and it shows through this, through the dancing and the art that they performed today,” Fox added.

Many report that they can feel strong energy emanating from the performers on stage, and some audience members even report seeing divine beings appear with the dancers.

While Fox didn’t report any heavenly sightings, he felt positive energy touch him. “Yes, you could feel the energy right through the whole show,” he said. “It’s very, very powerful.”

In the end, the shyest member of the group summed up the themes from the evening nicely.

“[Shen Yun] was very beautiful, it was moving. The stories that are told through the dance are phenomenal. The costuming was wonderful, and the horses were the best,” Langston’s guest said, referring to an ethnic dance performed by the male cast members that invoke the movements and feelings of Mongolian horsemen moving across their northerly grasslands.

She will take home the feeling and vivacity of that piece. “Energy, yes, you know, and you do need that energy. And that’s a good way to give it to you, is these wild horses. It was very, very good, very well done.”