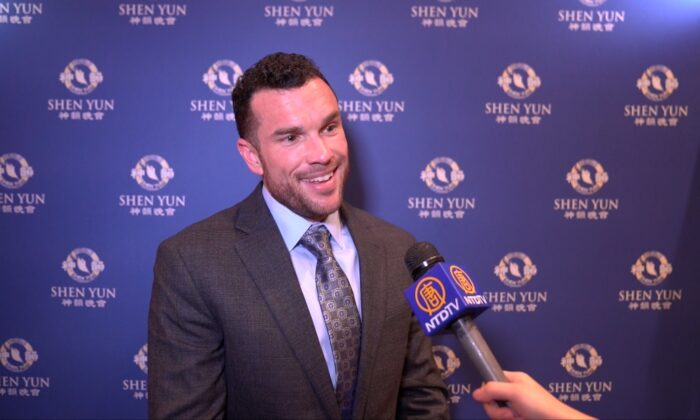 PHILADELPHIA—The birthplace of “life, liberty, and the pursuit of happiness,” historic Philadelphia is a beloved city to many. Courtland Foos, a residential and commercial building contractor, gained one more reason to appreciate it on Feb. 20, 2020, when he attended Shen Yun Performing Arts for the first time at the Merriam Theater.

“[Shen Yun] was great, fantastic, very colorful, vibrant. I learned a lot and the choreography was incredible,” the enthusiastic patron and business owner said.

The performance left him inspired and feeling refreshingly more connected to those who are different from him.

“Well, I just learned about the history, and repression of everything, and just really how the belief in something more divine and larger than yourself can be inspirational and healing and empowering. And it brings people together,” he said, adding that Shen Yun highlighted diverse peoples. “It’s just healing to everyone.”

Each Shen Yun performance consists of roughly 20 vignettes, each of which transports the audience to settings like ancient China, heavenly realms, magical kingdoms, and modern-day China. In addition to storytelling through classical Chinese dance, Shen Yun presents ethnic and folk dances.

Honestly there were times I got goosebumps.
— Courtland Foos

“Honestly there were times I got goosebumps,” Foos said, thinking back to the performance he had just stepped out of. “There are times where I felt a little sorrow. I could feel the pain. They were able to transmit the feeling and of the time and the depression and everything they were going through. I mean, there was excitement, there was sorrow, there was joy, there was hope.”

The storytelling dances in Shen Yun that are set in today’s China portray real-life persecution of spiritual believers, namely Falun Dafa practitioners, at the hands of the Chinese Communist Party. These adherents, who follow the discipline’s moral principles and energy-strengthening exercises, counter the brutality with compassion and faith.

Seeing this ancient spiritual discipline as part of the narratives prompted Foos to want to find out more about it.

“It opened my eyes to that, and I’m actually very curious about looking into that type of practice and everything. I think it’s very good,” he said.

Foos left a word of advice about Shen Yun for his fellow Philadelphians, and for anyone who might be considering attending their performance in the City of Brotherly Love.