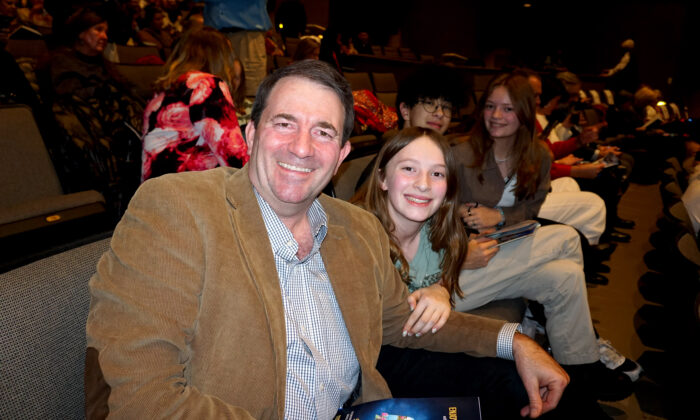 HUNTSVILLE, Ala.—Jeff Kennedy, a construction business owner in Huntsville, was uplifted by the beauty, passion, and spirituality of Shen Yun Performing Arts.

“Their beauty goes beyond their performance—there’s a passion,” he said, “I appreciate them for bringing that to my family in Huntsville.”

Mr. Kennedy, his two daughters Shea and Eva, and their friend attended a Shen Yun performance for the first time at the Von Braun Center Concert Hall on Jan. 24.

“It’s an awesome performance, I think the artwork and beauty of how they bring the culture is just awe-inspiring,” said Mr. Kennedy.

China’s authentic culture is inseparable from its spiritual heritage and Shen Yun presents a culture that draws upon ancient China’s Buddhist and Daoist philosophies. According to the company’s website, a pantheon of divine beings, spiritual cultivators, and mythology shaped the culture for 5,000 years.

Aside from Shen Yun being historically educational for his children, Mr. Kennedy also felt that the exposure to the values of traditional Chinese culture demonstrated both unity and commonality between Western and Eastern cultures.

Mr. Kennedy enjoyed how Shen Yun brought spirituality into the show and said that the two cultures and their respective spiritual beliefs, “aren’t that far apart.”

“I think it’s good for them to come to see the different culture [and] to see that we’re not that different,” he said.

What inspired Mr. Kennedy the most about Shen Yun was “the passion that they share for their art.”

“I appreciate the passion for what they do,” he said, “I watch their faces—that’s why I like to sit up close—you can just see it in their eyes … it’s more than just a performance, it’s an art.”

Since Shen Yun’s inception in 2006, its mission has been to revive traditional Chinese culture. The ancient culture came close to death under the tyranny of communism since the seizure of power by the Chinese communist regime in 1949. Shen Yun says its performance demonstrates “China before communism.”

“I think it’s very important to embrace your roots and your heritage,” said Mr. Kennedy, “if that’s your passion and belief, that’s what you should cherish and you should fight for that.”

‘It Wasn’t a Show, It Was an Expression’

“I am astonished by the amount of strength and discipline it takes to do what they’re doing,” said Mr. Pugh, “it’s fabulous … it’s amazing!”

Regarding Shen Yun’s mission to revive traditional Chinese culture, Mr. Pugh said, “I think it’s amazing that they have made these strides to reenergize it and bring it back.”

“I perceive a pride of the people, and a stoicism to make it through to retain their culture in the situation that they are in,” he added.

“Every culture has their own birth story, their own religious history, and there’s a lot of commonality [in values] … There’s something that transcends all people.”

China was once known as “The Land of the Divine.” In the past, artists looked to the divine for inspiration and cultivated virtue in order to create uplifting art. Today, Shen Yun’s artists follow in this noble tradition, which is why audiences feel there is something different about Shen Yun, says the company’s website.

“It wasn’t a show, it was an expression,” said Mr. Pugh, “you can see that, it seems to come out of the dancers … it’s something deep down.”

“I think what they are doing is part of who they are … and to be that dedicated, it has to be from inside … it’s not something that you do as a profession, it’s who you are, it’s just amazing!”

“I am very proud of what they are doing,” he said, “they did a fabulous job, and their dedication really showed.”