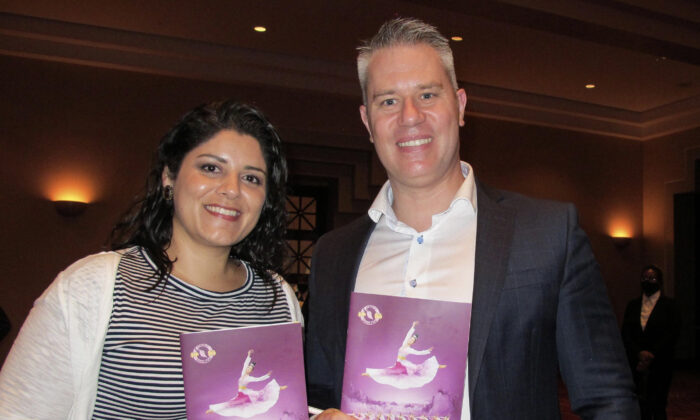 “I really enjoyed the performance, the depth of it, the spirituality,” Claudia Tanner said of her Shen Yun experience. She said that the performance hit on “a lot of deep themes” that a lot of people today are thinking about: “who you really are as human beings, that we were created, that there is more to life than what we’ve seen in the modern world today.”

Simon Tanner agreed, saying, “I mean for us, we don’t believe we are put here without a reason. We believe we are spiritual beings, that God put us here for a purpose. This stuff is important.”

New York-based Shen Yun portrays a China before communism. Their mission is to revive China’s 5,000 years of divinely-bestowed civilization and restore Chinese culture to its former glory before the Chinese Communist Party destroyed it.

“Modern society has really lost its way,” Mr. Tanner said. “They are missing the point of life, so it’s awesome for us to see this.”

“I visited China in 2002 and you could feel that something was wrong; people were already scared. Already, you could feel that this culture was dying,” he said, adding that he believes it’s a good thing Shen Yun is reviving the essence of traditional Chinese culture.

Mr. Tanner also expressed how he has seen a similar cultural erosion happening in the United States.

“The world that we are seeing in America right now is not about truth. It’s not about the divine; not about compassion, forgiveness, mercy. All those things, in fact, right now, they are cruel, cruel society … I mean the culture war has been going on in America for 60 years. It started in the 60s and destroyed traditional values, and it accelerates,” he said.

He said that the performance in Shen Yun about the Chinese regime’s crimes of organ harvesting was “hard for people to actually believe … but it’s happening.”

“We really hate the CCP. We are sickened by what they are doing, and this message needs to be told everywhere,” he said of Shen Yun‘s performance about the tragedy of current events in China.

“I think a lot of Americans, we don’t realize what’s been going on,” he added. “You get into a rhythm of life, materialism.

“I’ve learned from the past how America was about family, about quality time, about planning for the future, the legacy. These days, we don’t really talk about the legacy. It’s sad because America used to think that way. But now, it’s the deception and greed.

Mrs. Tanner agreed. “I think the best part was in the end, from our perspective, we see God healing the world, bringing the world back to the way it used to be, and that there’s time for people to get their life right. So I like the end piece where the waves come across the cities, and the guy holds his hand up to stop the wave—that’s God’s compassion.”