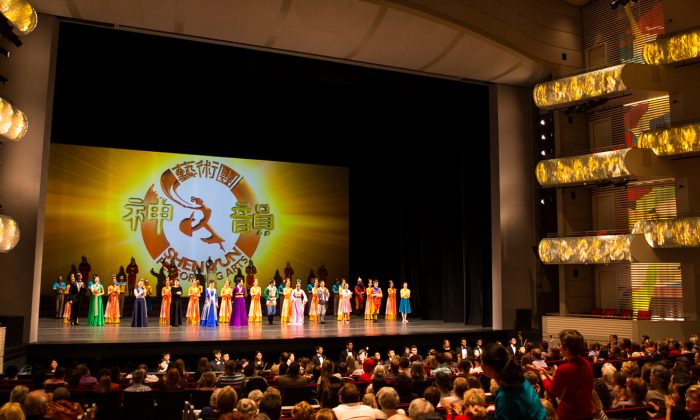 Shen Yun: ‘It is Incredibly Unique. It’s an Explosion’

KANSAS CITY, Mo.—“There are so many colors, so many brilliant colors. There are so many pastels. There are so many different things. There’s so much movement, so much grace, so much beauty, and intense, classic, incredible beauty. The spirituality is kind of the foundation of it all, and so it just takes it to the next creative level,” said Sally Rose, managing director of Jones Artistry, after seeing a performance by Shen Performing Arts.

As to the spiritual foundation Ms. Rose noticed, she said, “There was a spiritual part and an emotional, and there was much reference to … dance and heaven,” she said. And its effect was that “it leaves people in awe. I came out, and the crowd that I was walking with was completely silent. So, I think that it touches everyone in a different way.”

She saw the classical music and dance company at the Muriel Kauffman Theatre, part of the Kauffman Center for the Performing Arts, on the evening of March 29.

Ms. Rose brings an artistic eye to watching the performance, and an “innate talent for design, balance, the influence of color, balance, structure, the design, and so forth. … And, this presentation is so amazing because there is such an influence of emotion through the color, through the music, through the form, and the choreography.”

As a whole, she described it as a level beyond what other art does: “It is incredibly unique. It’s an explosion. Somebody has taken an incredible amount of time and thought into the costumes, the dance, the color, the lighting. … I noticed that the people around me were just completely absorbed. I was just so amazing. It was just so beautifully done and you can take a performance on so many levels and I think that this particular one was just something that just took it one step further.”

In mentioning the digitally animated projected backdrops, she said their interaction with the performers “just really takes you in,” she said.

“I had front row seats. It wasn’t one step off,” she said, in noticing that Shen Yun dancers seem perfectly synchronized.

Ms. Rose said that Shen Yun is already well known now: “I was talking about [Shen Yun] and all of the students knew about the performance. And, then I mentioned something on Facebook. It was just a little tiny statement, and I had like 37 comments. So, it’s well known.”