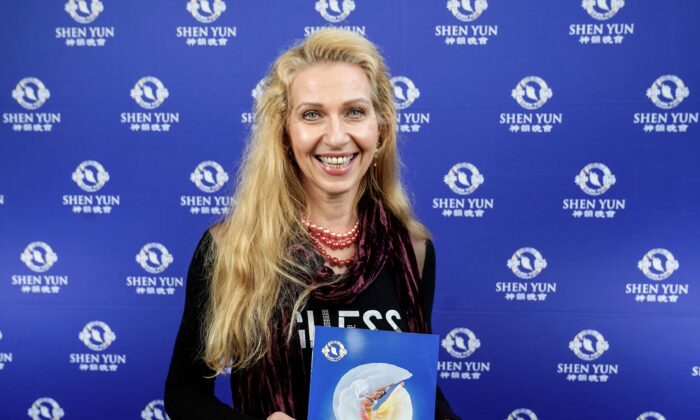 Gavranich’s involvement in music and dance spans a lifetime. She was formerly a professional ballroom and Latin dancer and has won many awards. She is currently teaching fitness and pilates.

“I thought it was spectacular,” Gavranich said. As a lover of dance and music, Gavranich appreciated the effort and discipline necessary to achieve the perfection seen in a Shen Yun performance.

“And I really enjoyed the costumes, the color—it was quite sensational. So very impressive,” she said.

“For me, it was just well-executed. And they made it look easy. But I appreciate that it was extremely difficult to do.”

One piece that resonated with Gavranich was the “Plum Blossom in Spring” dance, which depicts courage and resilience. “I thought that was exceptionally beautiful,” she said.

The spirituality embodied in Shen Yun brought tears to my eyes, Gavranich said. After the curtain went up and the performers began to dance, the energy in the room was just profound, she said.

“And the spirituality that they bring across in their dance and motion and livelihood just really resonates with me,” she said.

She congratulated the performers on their excellence and encouraged them to continue because the world needed more of Shen Yun.

China’s 5,000-year traditional culture has virtually disappeared since the Chinese communist regime came to power. While Shen Yun’s mission is to revive the authentic Chinese culture, they have been banned from performing in China.

It’s a shame that Shen Yun can’t be shown in China, Gavranich said, but its performances can still be appreciated by the rest of the world.

Shen Yun must continue to do what they are doing, she said. “The energy [from Shen Yun] is something that’s second to none.”

Also in the audience was Mrs. Margaret Polya, a former dance school owner. “I love dance and I just love music,” Polya said.

Polya was, in her younger days, a highly accomplished ballroom dancer. Now, she’s fallen in love with Shen Yun.

“The costumes, the precision, the movement—they move as one. Then the costumes, when they flow, they make beautiful arrangements. It’s fabulous. And the colors that they put together, absolutely unbelievable … loved it,” Polya said excitedly.

Through her love of dance and music, Polya felt a spiritual connection with Shen Yun.

“We need a lot more tradition in everything, and that’s what this is. It’s tradition, it’s art form, and it’s entertainment. It’s everything put together in one,” she said.

She encouraged the performers to continue promoting China’s traditions.

“Please keep on [with] what you’re doing. You’re excellent. And don’t change from your beauty and your calmness and precision.”