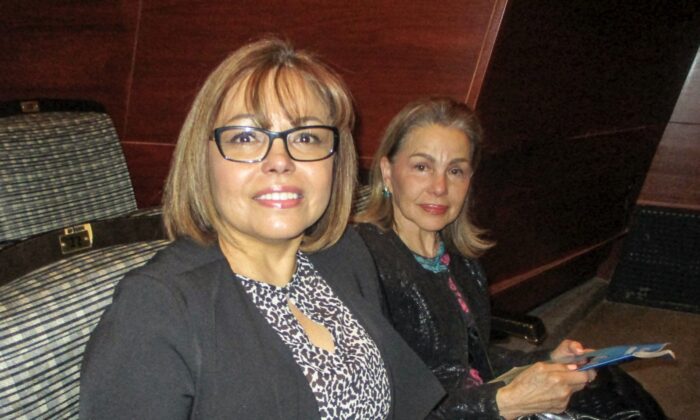 EDMONTON, Canada—Liliam Vasquez, a designer and owner of a home staging company, is passionate about design, colour, and art and applauded those elements and more of the Shen Yun Performing Arts performance at Northern Alberta Jubilee Auditorium in Edmonton on April 24.

“I love the show. Beautiful colors. The choreography is amazing. And the music so soft, and so calming. And the movement of the dancers is absolutely beautiful,” said Ms. Vasquez, owner of The Staging Place, who is from a family of fine artists.

New York-based Shen Yun was founded in 2006 with a mission of reviving the traditional culture of China and sharing it with audiences around the globe through world-class performances of classical Chinese dance and music.

It’s a culture with a history of 5,000 years that has deeply spiritual roots. And the costumes and colors are true to traditional aesthetics and styles and form part of the visual feast presented by every dance piece and story.

“The colors—they’re contrasting and just vibrant,” Ms. Vasquez said. “They picked the perfect colors to bring out that beauty.”

Ms. Vasquez, who is also a civil engineer by training, was impressed by the Shen Yun’s patented method of integrating a 3D animated backdrop with the stage performance. It allows the performers to remarkably travel back and forth between the stage and the background projection.

“I just think the creativity of the mixture of … technology and art and music is just absolutely breathtaking. I love it—it takes you into—another space and other time,” she said.

The digital projection features a host of architectural styles and designs, from celestial palaces to holy temples to ancient beacon towers.

“They’re so beautiful and are brought to life in a modern way. They’re very gorgeous!” Ms. Vasquez said.

She noted that design should be simple and that Shen Yun’s backdrop “brings out the reality of what you’re doing in a simple way … that are just so amazing.”

Another unique feature of Shen Yun is its orchestra. It’s the first in the world to permanently combine classical Western and Chinese instruments within a Western symphony orchestra. Shen Yun also boasts virtuoso vocalists who sing Chinese lyrics using the bel canto style.

“The message from the tenor was amazing, … a story of the gods and the earth and the people, and the connection between the divinity and us,” said Ms. Vasquez.

“The message was capturing because it’s something that I truly believe—that we’re on a path to evolve as human beings and become closer to God,” she said. Right now, “I think we’re just lost, … lost in material things.”

“We have to prepare too for that Creator [to come] because we’re living in the End of Times. … We’re preparing and getting better and better [as human beings to be] ready for that,” she added.

Mrs. Vasquez said if she had to sum up a Shen Yun performance in one word, it would be “mesmerizing.”

Braven Blackwell, who is the owner of Knighton Men’s Wear Fashions as well as the president of software company Seljax, was also among the audience.

“It’s very nice. It’s very colorful and full of acrobats and interesting message as well,” he said, referring to the challenging flipping and tumbling techniques performed by Shen Yun’s dancers.

Shen Yun’s dancers are trained in classical Chinese dance, and those techniques in fact originate from classical Chinese dance, an art form that has thousands of years of history. Those techniques were adopted over time by different forms of performing arts that we know today, including gymnastics, acrobatics, cheerleading, and even modern ballet, explains the Shen Yun website.

Shen Yun also presents story-based dances depicting the persecution of Falun Dafa, also called Falun Gong, a meditation and spiritual discipline based on the principles of truthfulness, compassion, and tolerance.

“The story is very beautiful, and it’s a little bit breathtaking—some of the hardship they have to endure,” said Jamie Linn, who attended the show with Mr. Blackwell.

The Chinese communist regime launched a persecution against Falun Dafa in 1999, and adherents have since been subjected to unprecedented imprisonment, torture, and abuse.

“In China, there’s still issues of how people are treated, and we would like to see them treated in a much better way,” said Mr. Blackwell.