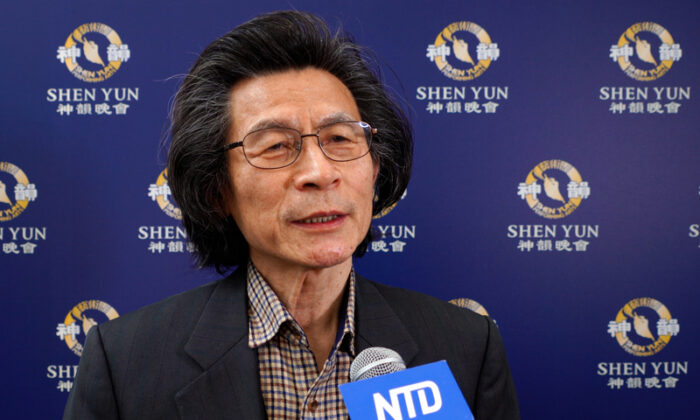 CHANGWON, South Korea—Seol Sooseok is the director of Gyeongnam Dance Troupe and the chairman of South Korea’s Preservation Association for the Wenchang Festival Game, which is the only Korean intangible cultural property in South Korea’s Gyeongnam area.

Sooseok was enthralled by the spectacular performance depicting the 5,000 years of the divinely-inspired Chinese culture presented at the 3.15 Arts Center in South Korea’s Changwon City by Shen Yun Performing Arts on the afternoon of  Feb. 15, 2020.

“[Shen Yun] interprets the broad and profound Chinese culture and history,” he said. “It is magnificent and unparalleled.”

He was deeply moved by Shen Yun dancers’ exquisite movements with perfect unison and superb skills.”

“As a dancer, the most important part is skills,” Sooseok said. “Shen Yun performers’ skills have reached an amazing level.”

“Shen Yun dances are very colorful and vibrant full of strength,” he said.

“I felt [the dance dramas] are very special, and very interesting,” he said with praise. “They are eye-openers for me.”

“It is because Shen Yun dances have absorbed the [essence] of the broad and profound Chinese culture that they are so magnificent and can let the audience have an all-new feeling,” he continued. “Their skills should have been thoroughly refined that they are so gorgeous.”

“Shen Yun’s backdrops are like magical windows that infinitely extend and transform the stage. The digital designs complement and synchronize all aspects of the performance, and are as grand as they are intricate,” Shen Yun website explains. “Inspired by 5,000 years of history, our designers create vivid animated settings that truly reflect China’s multifaceted geography, society, regions, and dynasties. Some scenes even transcend this world, bringing you a touch of the heavens.”

Sooseok felt Shen Yun made the most of this innovative backdrop.

“The vivid images on the backdrops make the audience have the feeling of being on the scene in person,” he noted. “The magnificent images of celestial realms envisioned are also displayed [on the digital backdrops], and they are perfectly synchronized with the entire performance.”

He was inspired and hoped his fellow Korean artists would have the same opportunity to witness Shen Yun.

“I hope that Shen Yun can perform in South Korea more often so that Korean dancers can also learn from it,” he stressed. “I think it can be an opportunity for Korean dances to attain better development.”

With reporting by NTD Television and Billy Shyu.