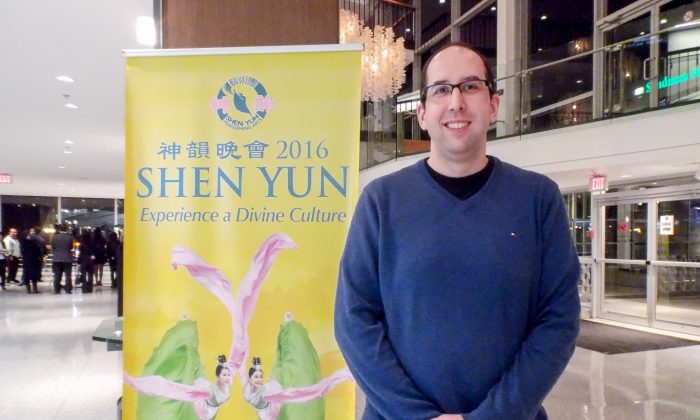 VANCOUVER, Canada—Viktor Culjak wasn’t sure about what to expect before watching, for the first time, a classical Chinese dance performance that aims to revive China’s 5,000 year-old civilization.

“Sometimes you worry that something historic is going to be very dusty and stale,” said Mr. Culjak, a chartered accountant at WesternOne Inc. But after attending the opening night of Shen Yun Performing Arts at Queen Elizabeth Theatre on Jan. 22, he declared Shen Yun “really amazing, really entertaining, very fresh, and very invigorating.”

I really appreciated that it had that spirituality.
— Viktor Culjak

Mr. Culjak learned that there’s more to traditional Chinese culture than history, dynasties, conquests, and great emperors. “I really appreciated that it had that spirituality,” he said. “I had no idea that that was something so embedded in Chinese culture.”

Founded in 2006, the New York-based Shen Yun aims to bring back China’s divinely inspired culture through “breathtaking music and dance,” according to the company’s website.

For a decade, Shen Yun has toured hundreds of cities and regions, bringing millions of audience members to their feet to applaud the superb classical Chinese dance techniques—graceful leaps, spins, and flips—and a masterful live orchestra featuring the sounds of East and West, and state-of-the-art digital projections.

Mr. Culjak was particularly impressed with the Shen Yun Symphony Orchestra and the animated backdrops. “The blending of the orchestra with the traditional Western instruments and Chinese instruments—I had no idea you could blend the two like that,” he said. “I thought they were pretty exclusive.”

The Shen Yun Orchestra creates a refreshing, new sound by combining “the singular beauty of Chinese melodies with the precision and power of the Western orchestra,” according to the Shen Yun program book. Chinese instruments of ancient pedigree, like the two-stringed erhu and four-stringed pipa, can be heard alongside the instruments found in a standard Western orchestra.

Mr. Culjak also found Shen Yun’s digital projections “really innovative and entertaining.” These digital backdrops, which feature landscapes from China’s historic past as well as heavenly paradises, are designed to “complement and synchronize all aspects of the performance,” according to the company’s website.

In all, Shen Yun left Mr. Culjak with “a very warm feeling.” “You get very happy, very positive,” he said.