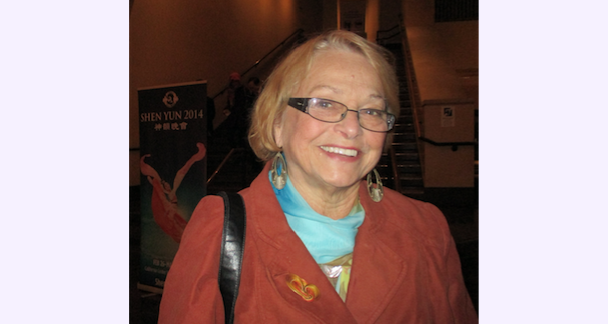 ESCONDIDO, Calif—When students have problems they come to see the school’s counselor. And often the advice they get is: “Be brave.”

Retired science teacher and school counselor Martha Bowling saw Shen Yun tell stories of bravery when she saw the performing arts company at the California Center for the Arts on Jan. 26.

“The heart would not give in—that it would hold its belief and its faith, and that was very beautiful, the story of Falun Dafa,” she said.

Ms. Bowling was referring to the piece “A Steadfast Heart,” which shows how an elderly couple is persecuted by the Chinese regime because they practice the exercises of the spiritual school Falun Dafa, which is deeply rooted in Chinese traditional culture.

Each of the Shen Yun’s individual songs or dances highlights some cherished value of traditional Chinese culture—compassion, loyalty, kindness or bravery—often by telling a story, sometimes through the singing of award-winning vocalists. In “A Steadfast Heart,” their belief helps the elderly couple to overcome persecution with divine help.

Founded in 1992, Falun Dafa is a spiritual meditation practice that teaches truthfulness, compassion, and forbearance. But since 1999, the communist regime has been brutally persecuting the practice. Millions of Falun Gong practitioners have been arrested, illegally detained, tortured, and even killed for their organs.

“There is always evil and lie, lying that tries to destroy people’s faith, and people’s caring, and people’s goodness. That theme ran through the monkey story [“Monkey King and Dragon Palace”], it ran through the stories of the Red Guards [“Monks and the Red Guards”]—very powerful. And it’s encouraging, that there are lots of brave people out there, and it challenges me to be brave,” said Ms. Bowling.

For thousands of years, the Chinese called their country the “Divine Land” (“Shen Zhou” in Chinese) and the teachings of Buddhism, Taoism, and Confucianism were the heart of the culture. It was believed that the arts were given to humankind as a way to bring some of the divine to earth.

According to Ms. Bowling, Shen Yun succeeded in its endeavor: “It’s magic, and brings the divine and mystical to earth, to a stage, to our eyes. And in a very beautiful way.”