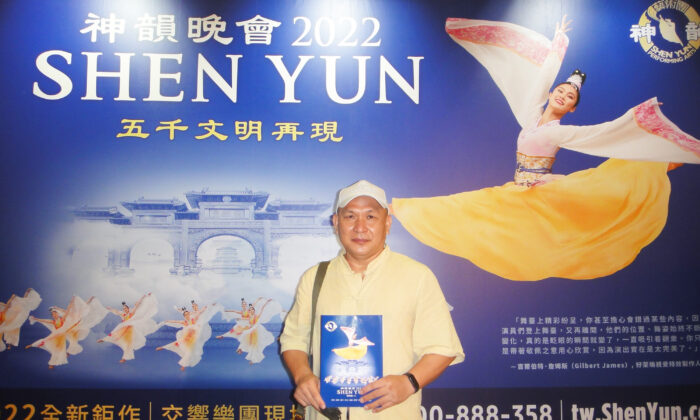 New York-based Shen Yun is a classical Chinese dance and music company that tours the globe each year, mesmerizing audiences with its exhilarating dances.

Many audience members commented on feeling that there’s something special about the performance that has uplifted and energized them.

Mr. Yang was at Shen Yun‘s first performance in Miaoli on the evening of July 5, and he felt the music and dance lifted the spirits of the audience after enduring two years of the pandemic.

“Our bodies and souls received great comfort and recovery,”  he said.

Shen Yun has visited Taiwan for 14 seasons but had never performed in Miaoli. On Tuesday evening, the Miaobei Art Center was filled with flowers as county magistrates, mayors, and legislators from Miaoli and a nearby county and city presented their floral greetings to Shen Yun.

Mr. Hsu said that Chinese culture is profound, and people are proud of it. Shen Yun is reviving Chinese culture, which awakens people to keep their faith in gods and divine beings and follow traditional values.

“We enjoyed the music, dance, and the digital backdrop—it’s a fabulous performance!”

Sung Kuo-ding, Miaoli County councilor, said watching Shen Yun is like transcending time and space to different periods in history and experiencing the then culture and life.

“The interaction between the backdrop and dancers, the exquisite costumes, the perfect dancing, and the orchestra’s blending of Chinese and Western instruments. … Shen Yun is brilliant and very powerful,” Mr. Sung commented.

‘Rarely seen in the world’

“The dances [of Shen Yun] display techniques that are rarely seen in the world. The stories the performers are telling are very inspiring,” said Lai Chang-hsiu, a national martial arts instructor.

Mr. Lai said that he was uplifted by Shen Yun: “The nature of human beings is to be kind. We should not have too many desires. We should use this chance to reflect on ourselves.”

Shen Yun will perform in Taipei from July 8 to July 10.