Shen Yun: ‘I didn’t expect perfection to exude so much humanity’ 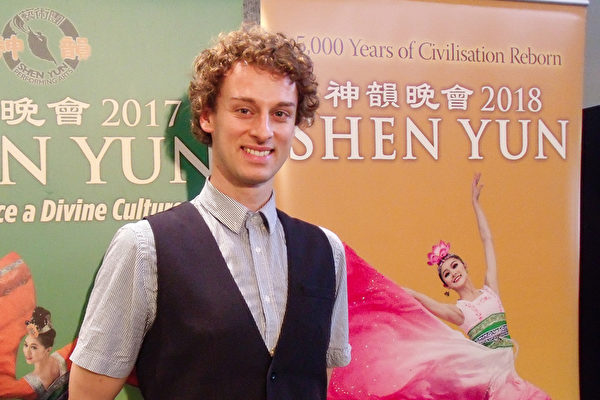 Wilfried Godier enjoyed Shen Yun at the Cité des Congrès in Nantes, France on Feb. 23, 2020. He said, "It's one of the essentials of life!" (The Epoch Times)

NANTES, France—Shen Yun Performing Arts was “a strand of color in our soulless grey world,” claimed Wilfried Godier, a young singer and dancer from a music-hall troupe based in Morbihan. It’s his mother, founder of “Swing Girls and Boy”, who introduced him to dance and then to choreography at a very early age. Having then turned to song, Wilfried Godier knows very well the world of dance.

Cultivating a passion for oriental culture, Godier was able to perceive in Shen Yun aspects of the Chinese culture such as the presence of the five elements that form, according to this culture, the whole universe: metal, wood, water, fire and earth.

“Ah! The show was beautiful and perfect! And despite this perfection, I found a lot of humanity in the dancers and singers! The colors were sumptuous, it was very airy, very aquatic! I think that all the elements are depicted in the same show! And the movements are a blend of something fluid and rhythmic with a lot of energy!” he said about New York-based Shen Yun at the Cité des Congrès in Nantes, France on Feb. 23, 2020.

“I didn’t expect perfection to exude so much humanity,” he said.

This energy comes from the dancers, Godier said, and compared it with the practice of Chinese medicine, which he studies himself. “I think that we can find a branch of traditional Chinese medicine within this performance, which is a pure jewel! I’ve never seen anything so beautiful!” he said with emotion.

China was once called the “Land of the Divine”, spirituality was omnipresent in the Chinese culture, within the humblest people as well as within the Emperor himself.

Having the desire to revive this traditional Chinese culture, Shen Yun’s artists perpetuate this spirituality in their work. “They meditate together, study teachings together, and strive to live by the principles of truth, compassion, and tolerance,” says the Shen Yun’s website.

Wilfried Godier was able to feel this spirituality: “I know Buddhism partially, and I felt this kindness, this benevolence towards themselves, towards the public and what they want to share with the world, in general … So, it’s a beautiful and colorful instant of poetry in this world of greyness in which we live without soul, it’s a change, it feels good, we come out of it uplifted!”

He concluded this show is a must: “Absolutely! It’s one of the must-see things in life! You have to see this show at least once, at all costs!”