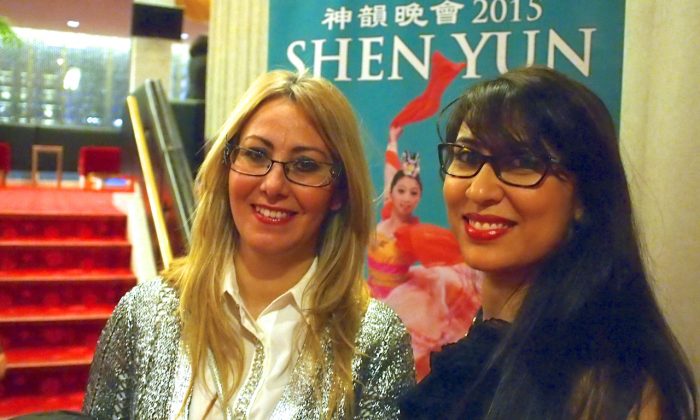 Rim Zid (L) and Zeineb Ouni were impressed by the beauty in the Shen Yun Performing Arts show they saw at Place des Arts in Montreal on Jan. 7, 2015. (Nathalie Dieul/Epoch Times)
Company

Shen Yun ‘Gives You a Feeling of Peace and Tranquility’

MONTREAL, Canada—Shen Yun Performing Arts played the first of six shows at Montreal’s Place des Arts on Jan. 7, delighting the audience with its portrayal of ancient Chinese culture through music and dance.

Rim Zid, a lecturer at the University of Montreal, and Zeineb Ouni, a researcher at Université du Québec à Montréal, enjoyed Shen Yun’s magic as it took the audience on a journey through 5,000 years of Chinese civilization.

Shen Yun’s mission is to revive the Middle Kingdom’s authentic traditional culture—the culture that existed for 5,000 years before the Chinese Communist Party came to power 65 years ago and set about destroying it, according to the performance company’s website.

Ms. Ouni said she has “always felt that it’s really a different culture that is very intriguing” and that she would like to know more about it—something Shen Yun achieved, she felt.

“I think this show gives you an idea, it confirms things,” she said, adding that the performance left her with a feeling of serenity.

“It gives you a feeling of peace and tranquility with the music and everything. We feel like we are flourishing.”

The hallmark of Shen Yun is classical Chinese dance, an art form passed down over millennia in the Middle Kingdom’s imperial courts, theatres, and operas.

“With the soul of the dancers, they are very professional, they really are experts in their field,” said Ms. Ouni.

“I did not know what to expect, but I’m impressed.”

He liked “the colours, the dance, and also the videos in the background,” he said, referring to Shen Yun’s groundbreaking animated backdrops.

“There is a lot of movement in the dance—it is a dance that is fast,” he said.

“We learned so much from the show,” added Mr. Harel.

“I would say we really got an eyeful there,” said his wife.