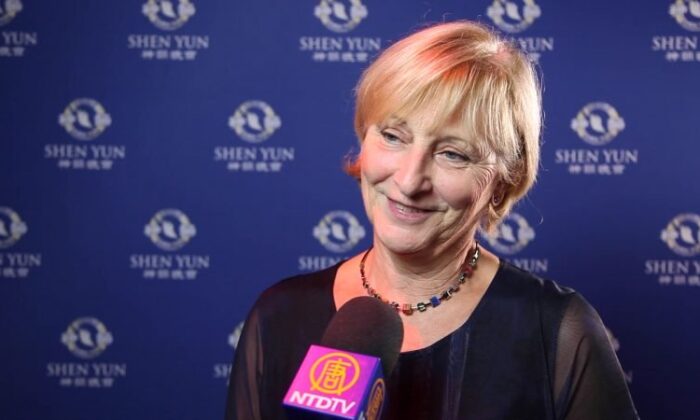 COLOGNE, Germany—Ulla Koch, the trainer of the German women’s gymnastics team, who was awarded the International Olympic Committee’s (IOC) Lifetime Achievement Award this January, and is said to be responsible for the Germans to qualify for the Olympic Games, the first time since 1992. On Feb. 12, 2020, Koch attended a performance of classical Chinese dance, the predecessor of gymnastics, witnessing Shen Yun Performing Arts at the Musical Dome Koln (Cologne).

The venue, Musical Dome Koln, is the largest entertainment venue in Cologne with its 1,700 seats. It has become a favorite entertainment center for the Cologne locals and visitors of the city, because of its extraordinary glass and concrete construction, and its prominent location directly facing the Rhine River promenade.

Immersed in the Performance

Having been involved in gymnastics and other types of sports, Koch could not take her eyes off “the graceful and talented artists, especially the dancers.”

It was amazing that “After the end of the show, I stood much straighter,” she added. She no longer slouched but copied the posture of the performers.

“Given my background, I found the dance movements terrific.” Her eyes were glued to the stage and she found it exhilarating to watch every movement.

Watching the show so closely she could discern “a connection between acrobatic, elegance and mobility–a marvelous combination of movements.”

Eyes Glued to the Stage

The costumes bedazzled the eyes of the audience, including those of Koch, “The diversity of colors was amazing–I couldn’t move my eyes away from the stage.”

Just like so many others in the audience, Koch said, “I could let go of all stressful feelings. The show inspired me, and I know now what it means to be in peace with your surroundings.”

With reporting by NTD Television Heide B. Malhotra.