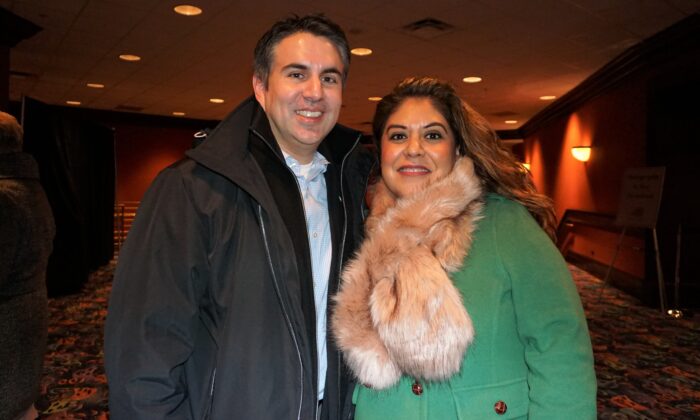 ROSEMONT, Ill.—Magical and mystical were just some of the words that Terry and Adriana Collins used to describe Shen Yun Performing Arts World Company’s evening performance on Feb. 15, 2020, at the Rosemont Theatre.

Adriana Collins works for the state of Illinois while Terry Collins is a real-estate attorney.

“It was very magical. It was mystical,” was Ms. Collins’s overall impression. “I really enjoyed it to see all the different parts and levels of it. So much of [what’s on] the screens, the dancing, just the ease of the tumbling and everything just seemed to be out of a storybook,” she said.

Mr. Collins agreed and added “The dancing transcended all the different time periods and kind of brought you back to those dates. And you know, I could see that happening in the years past and just observing and then to go from the beginning to the end to the modern was a nice transition.”

Shen Yun is a New York-based music and dance company that tours the world each season, bringing the true picture of traditional Chinese culture through story-based classical Chinese dance. Stories from China’s literature, folklore, and its rich history spanning 5,000 years up to the present day are brought vividly to life on stage.

Unfortunately, since the communist regime seized control of China in 1949, it has suppressed the transmission of its traditions that are deeply rooted in spirituality.

“It’s a beauty that they’re suppressing. You know, the production lets everyone in the world know how great this mystical dance is,” Mr. Collins commented “[It] gives you inspiration and hope. You know, knowing that there’s a higher being out there that watches over us is reassuring.”

Shen Yun features a live orchestra that is unique in that it showcases a blend of Eastern and Western instruments.

“I like the classical, but the Western with the Chinese, I think it blended beautifully. Music transcends all. So I think it was really fitting,” Mr. Collins said.

“There were a lot of techniques too in the music that went well with the choreography,” Ms. Collins added.

As for the dancers, Mr. Collins commented, “I think the skills of the dancers are superb. I mean they’re very well trained and flawless.”

“Definitely be back next year. I hope it comes back again,” Mr. Collins said finally.