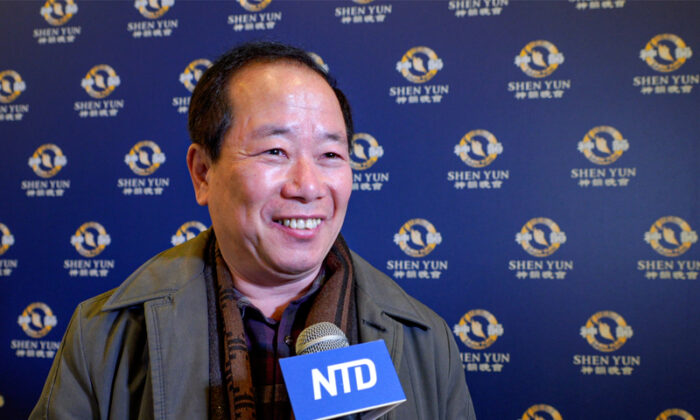 As what he had experienced last year, Lee Dongyeong was once again deeply moved by Shen Yun’s performance celebrating humankind’s precious traditions and enduring virtues this year.

“Shen Yun creates a new opportunity for the rebirth of humanity,” he said. “[Shen Yun] vividly displays celestial realms that move our souls and enlightens our wisdom.”

That is the aim, according to Shen Yun’s website: “This is a storyline of 5,000 years. Now is your chance to embark on an incredible adventure that captures the spirit of ancient China. Through the universal language of music and dance, Shen Yun Performing Arts weaves a wondrous tapestry of myths and legends, leaving audiences with newfound inspiration and hope.”

“Not only are the dances and images on the backdrops very beautiful, but every detail of dancers’ movements, the [set] design as well as the color-matching of costumes are perfect,” he continued.

“Shen Yun is a masterpiece that will be remembered by the entire world,” he said. “It’s really remarkable.”

Lee Dongyeong very much enjoyed the mini-drama pieces based on stories and legends that have been documented throughout Chinese civilization.

“There are many [dance dramas] featuring legendary stories of celestial beings,” he explained. “They demonstrate the beauty and peacefulness of the world to us.”

“Generally speaking, what Shen Yun performs is something about culture and arts, and its contents are wonderful,” he added. “Even the celestial realms, which are completely different from the real world, are also demonstrated in Shen Yun’s performance.”

“In particular, the last piece ended with the descending of Buddha [is very touching],” he said.

Lee Dongyeong hopes that such a soul-stirring performance with abundant cultural connotations can be enjoyed by more people so that the world can be a more peaceful and more harmonious place.

“Shen Yun truly touches the human soul,” he said. “I earnestly hope that the cultural and artistic values [of Shen Yun] can persistently be passed down to future generations through its world tours.”

“It would be something great, if [Shen Yun] can usher in the new epoch for the rebirth of humanity,” he said.

With reporting by Zhao Run-de and Billy Shyu.