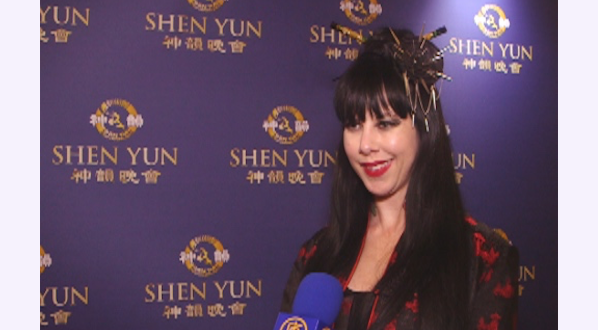 ESCONDIDO, Calif.—”I loved all the technical aspects and the positive message that were brought to the show tonight,” said Andrea George, after attending a sold-out performance of Shen Yun Performing Arts World Company at the California Center for the Arts on Feb. 21.

Ms. George has been a celebrity hairstylist for over 17 years, and owns the Coutured Coif Hair Salon in Del Mar.

“The message I got was we all need to come together as one, to become unified, to make our time here on this planet enjoyable for all, to help each other and always be kind to one another, to be pure from the heart, and be very true to who you are,” she explained.

China was once known as the “Divine Land,” with the belief that its rich culture was a gift from the heavens. New York-based Shen Yun’s mission is to revive the divinely inspired culture of China through dance and music.

A Shen Yun performance includes over 20 vignettes, taking audiences on a journey through 5,000 years of China’s glorious history, from ancient tales to the present that includes myths, legends, and modern stories of courage where “mortals and divine beings merge on stage as one,” according to Shen Yun’s website.

“The story telling was really very well done. It’s bringing us in from the beginning of the culture, and all of us coming as one to the planet; teaching different lessons about love and tolerance,” she said.

Ms. George especially enjoyed the depiction of the Creator descending to earth to save humanity in the final piece, The Divine Renaissance Begins. “I love how it ends up in a very positive note with Buddha coming, bringing joy and inner peace to everyone,” she said.

Being a retired professional ballet dancer gave Ms. George the appreciation of classical Chinese dance, which is “known for its incredible flips and spins and its gentle elegance, it is one of the most rigorous and expressive art forms in the world,” according to the website.

Ms. George marveled at the skills of Shen Yun dancers and the costumes, “They were absolutely phenomenal. I noticed the technical aspect that was different from American ballet. Technically, it was just stunning. It was amazing to watch. It was just so beautiful.”

Ms. George said she would recommend Shen Yun to all of her friends: “It was simply breathtaking. I will tell all of my friends that they definitely have to come to see the show. I am really happy to be here tonight to see the show.”

Ananda Stevenson had thought she came to Shen Yun to see a dance performance. Little did she know, she was in for a pleasant surprise.

After watching Shen Yun, she said, “I didn’t know that it would encompass compassion, meditation, Falun Gong, Qigong, and tell a spiritual story. I thought it was a dance performance, so I was surprised. It was everything.”

Ms. Stevenson is a Qigong teacher. She is also a licensed acupuncturist with a master’s degree in traditional oriental medicine. She has more than 20 years of experience, and owns the Dragonfly Acupuncture practice at the Cedros Natural Health Center.

She felt a strong connection between her own beliefs and the spirituality of traditional Chinese culture. Particularly, the Shen Yun’s storytelling performance resonated deeply with her.

“Telling a story of a long history, and how we have been on a journey on this planet is just very real for me, very true. I believe we did come from the stars, and we are very old,” she said. “I think if we unify ourselves among the common man, rather than thinking people are higher and lower, I think we are going to head in a direction of an incredible place that we have never been before. I believe in that. I feel it in my bones.”