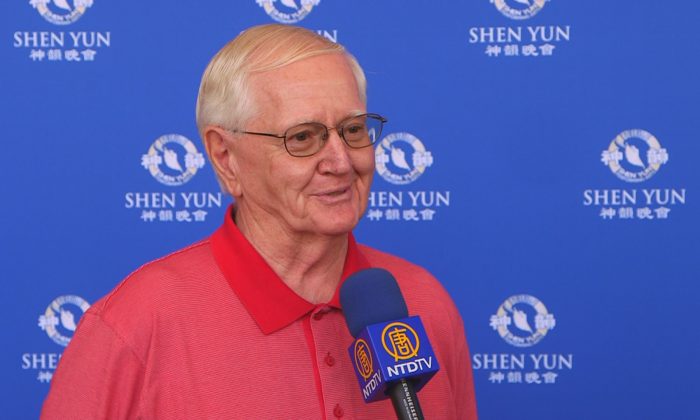 LONG BEACH, Calif.—As an owner of a brokerage seafood company that exports live lobsters and Dungeness crabs to China and other countries in Asia, Jim Allen has traveled to China quite a few times.

Hearing that Shen Yun Performing Arts, the world-class classical Chinese dance and music company, was coming to town, he found himself at the Terrace Theater on the afternoon of March 20, seeing the performance. “The performance was fantastic. I’d love to see it again,” gushed Mr. Allen.

Not only was he impressed by the great performance and appreciative of the performers, but he was also inspired and uplifted by the spirituality of traditional Chinese culture and the virtues—compassion, loyalty, kindness, and bravery—demonstrated throughout the performance.

“I can honestly say I’m sorry that the people in China don’t embrace this culture. It’s so good. It’s peaceful, it’s spiritual… It has a good meaning of truth [for] the world,” Mr. Allen said.

He said that if more people in communist China would embrace its own past culture, world would be so much more loving, caring, and giving. “And that’s what it’s all about.”

“Nowhere else can you see the authentic Chinese culture that Shen Yun represents. Sadly, this culture has been almost completely destroyed in China under communist rule,” according to the program.

In 2006, a group of distinguished classical Chinese artists from around the world came to New York and formed independent and nonprofit Shen Yun Performing Arts with a mission to revive traditional Chinese culture through storytelling dance and music.

A Shen Yun performance includes almost 20 vignettes accompanied by an orchestra that transports the audience members on a journey through China’s culture and beliefs, where myths and legends come to life, and virtues such as bravery, compassion, kindness, loyalty, and perseverance are personified.

Mr. Allen commended the company for the work and effort put into creating such a great performance: “It’s fantastic. Keep it up, and hopefully the people in China, all the people… the billions will embrace it and bring it into their hearts.”

After seeing Shen Yun, Mr. Allen was left with feelings of love and hope: “It’s love. It’s something of giving but also receiving from another country.”

He said there is a lot of love in China, but due to communism, the culture has been hurt. “Hopefully that will change in time,” he said.

After seeing Shen Yun Performing Arts last year, Jim Ovard, a retired captain in the U.S. Navy, returned to see Shen Yun at the Terrace Theater on March 20. He said, “I came back again to bring a special lady friend to see this show this time.”

Shen Yun makes 400 original and handcrafted costume pieces used almost in a prop-like effect by dancers who perform classical Chinese dance, one of the most comprehensive dance systems of the world. Each dance is accompanied by an interactive digital backdrop that allows the performers to appear to fly into the air and perform superhuman feats from ancient Chinese legends. Supporting all of this is an orchestra that consists of a unique blend of Eastern and Western instruments.

But that was not all. Captain Ovard said, “The message I get is, all people are trying to live together because of the way that the creator made for all of mankind,” and that is important in today’s world “without a doubt.”