Shen Yun a Wonderful Way to Enjoy Ourselves Despite Pandemic, Says Theatergoer 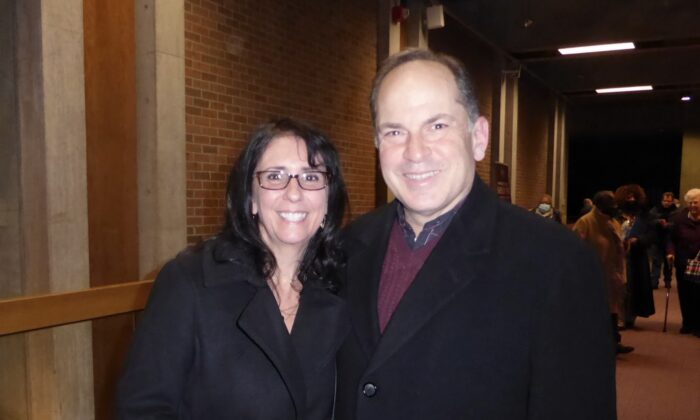 SYRACUSE, N.Y.—Two years into the pandemic, Joe Cavataio and Elaina Augustinos said they did not hesitate to buy tickets when they received a postcard advertising that Shen Yun Performing Arts was coming to perform in Syracuse.

Cavataio’s thought was, “We’re healthy. We just want to go in and enjoy ourselves.”

Shen Yun, performing at The Oncenter Crouse Hinds Theater in Syracuse, is reviving China’s traditional culture that has all but been swept away by the Chinese communist regime.

Cavataio, a sales manager, was impressed by the variety of performances.

“The instrumental performances were great. The dance pieces were mesmerizing. The effects were wonderful. It was really just very, very, very good all around,” he said.

Augustinos, a retired school teacher, was amazed at how Shen Yun incorporated the different aspects of the performance.

“I don’t understand how the conductor kept everything on time. I was really impressed. It was so beautiful, the colors, everything,” she said.

The couple also expressed appreciation for the spiritual aspects of traditional Chinese culture. The Chinese believed that their 5,000-year-old culture was divinely inspired and that the beliefs and moral standards of religious and spiritual practices were passed down to the Chinese people by heavenly beings.

“We’re Christian and we were saying it’s similar. We have been commenting on how religions have existed for thousands of years and have, at their core, common values,” Augustinos said.

“It was very was touching,” Cavataio added. “It was very nice to see that aspect of it. The way they brought it all together was very, very inspiring.”

Barry Horowitz, a field manager for Verizon, and Carol Tardugno, an insurance worker, were also in the audience.

“It’s very entertaining. I enjoyed the way the background—the theatrical part of it on the screen is portrayed with the characters as they go in and out of their locations, to the different far back areas,” Horowitz said as he described Shen Yun’s patented 3D projection technology.

Tardugno was also impressed by the interplay between the dancers on stage and the projections on the digital backdrop.

“It’s seamless. It’s just absolutely beautiful. The colors and the theatrics of it. I’m thoroughly enjoying [Shen Yun],” she said.

Tardugno also said she felt very energized by the whole performance and that it was good to see people come out of their homes to see Shen Yun together.