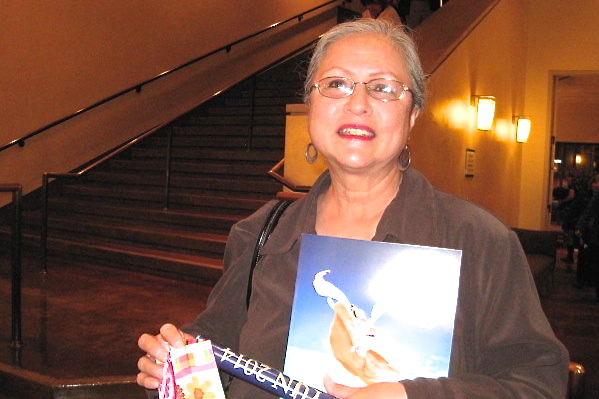 Ella Morales, a teacher and theater performer, attended Shen Yun Performing Arts’ final performance at the California Center for the Arts, on March 2.

Established in 2006, Shen Yun is a New York-based non-profit organization committed to bringing 5,000 years of Chinese civilization to life through the performing arts. Widely regarded as an international phenomenon, Shen Yun’s four touring companies have reached millions of people across 20 countries and in over 100 cities.

Ms. Morales was very inspired by the show.

“It’s just very spiritually uplifting, and I loved every minute of it,” she said.

According to the Shen Yun website, “Whether set in the past or in contemporary China, every dance embodies traditional Chinese values. Ideals of loyalty, filial piety, and veneration for the divine are cherished and celebrated. Heroes are extolled for their compassion and tolerance as much as their courage or determination when facing adversity.”

Ms. Morales said she would definitely encourage others to go see the performance when it comes back into town.

“I was even thinking of taking my nephew next year,” she added. “I think he would appreciate coming and seeing firsthand, the culture, the dancing culture, and all the stories of a lost culture that is so important.”

As the website explains, “Forcing atheism upon society, the Chinese Communist Party has for decades launched various campaigns—most notably the Cultural Revolution—to destroy not only cultural sites, temples, and relics, but also the Chinese people’s belief in virtue and faith in the divine.”

Also in the audience Sunday night was retired Air Force Colonel Elton Pollock, who attended the show with his daughter Emily. Mr. Pollock particularly enjoyed the live orchestra that accompanied the dancers.

“I was looking forward [to] hearing the instruments,” said Mr. Pollock.

Shen Yun’s orchestra includes classical Chinese and Western instruments that are blended together in a unique way. “The Chinese instruments include the erhu, dizi, ppipa, and suona,” states the website. “All materials used to make these instruments originate from nature, and the significance and symbolism of each is closely tied to its natural origin.”

Mr. Pollock thought the show was a great introduction to Chinese culture for his daughter.

“She has never seen anything in China, so this is a good exposure.”

Shen Yun’s New York Company will now be moving on to Tempe, Arizona, where they will be performing from March 7 to 9.