Shen Yun: A Breath of Fresh Air After the Pandemic 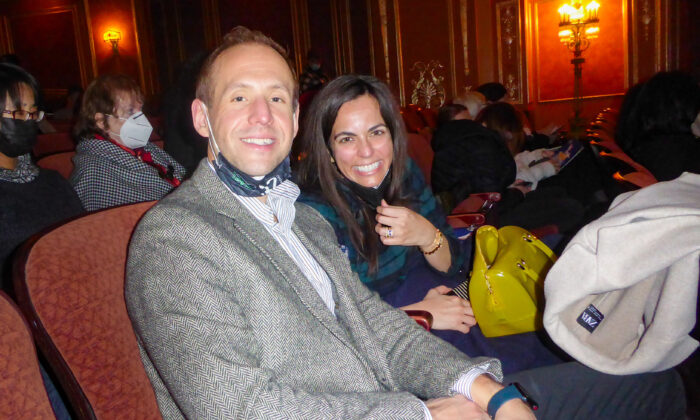 PITTSBURGH, Pa.—Shen Yun Performing Arts has proved to be a breath of fresh air for home-bound Americans who only want to enjoy the normality of life again. Classical Chinese dance and music is a true tonic for relieving the stiffness of long months of a restricted lifestyle for many people.

“We’ve been stuck in the house for two years. So, it’s good to finally get out,” said John Herman, an executive in a health and wellness company.

“We’re always very careful and …. [the precautions] … at the theater made us feel comfortable,” said Vanessa Herman, Insight Director at Olson Zaltman, a market research company.

“It was really cool, the fans and sleeves—unlike anything I’ve seen before,” she said.

“Yes, the colors and the costumes, it’s beautiful,” added John.

“The music is incredible,” said Vanessa.

Shen Yun’s live orchestra is the first in the world to combine classical European and traditional Eastern instruments.

The couple had been inspired by the performances. John commented that Shen Yun showed that there was a deeper meaning to life than what is valued in society today.

The mini-drama, “Insanity during the End of Days,” was a revelation for Vanessa. This is a story of a young Falun Gong practitioner who was persecuted by the communist regime because of her faith.

The communist regime has been persecuting Falun Gong, (also known as Falun Dafa), for over 30 years, despite the practice having brought great physical and mental wellbeing to millions of Chinese people.

“I think, communism tries to make everyone the same. So, it eliminates a lot of the nuances and culture that the different regions and people …  have. So, it’s nice that [Shen Yun] keeps it alive,” said John.

Since it came to power, the Chinese communist regime has carried out a campaign to destroy all the vestiges of Chinese traditional culture, including religions, and ethnic groups.

He noted that the precautions taken by the theater to eliminate the risk to people from the pandemic were helpful in calming fears about attending the performance.

Fehl said his young daughter had been sitting on the edge of her seat throughout the performance, just watching.

“When we got here, she said she was smiling so big that her cheeks were hurting. Because you’ve been so excited for this for months,” said Fehl to his daughter. He had bought tickets to Shen Yun as a gift for his daughter’s birthday as she had been keen to attend for many years.

She loved all the performances but the dance, “The Restaurant Tale,” was very popular with both father and daughter. The tale narrates the hilarious play among restaurant owners who are vying for business.

The Monkey King dance prompted Fehl’s daughter’s eyes “perk up” as she had already heard about it before, said her father.

Another dance that impressed Fehl was “The Men of Jurchen,” depicting the predecessors of the Manchurians who were renowned for their skill in archery and horsemanship,

Fehl was already aware of the persecution of religious groups in China.

“Not only of Falun Dafa, but of Christian believers,” he enlarged.

Fehl was also touched by the mini-drama, “Insanity During the End of Days.” The dance, portraying the intense suffering of a father and daughter, was powerful, said Fehl.

He commented how in some parts of the world [the authorities] were clamping down on religions and in other places, people were simply abandoning their religious beliefs.

“The dancing and the music as well … it fits so well together… it’s so well done,” he said.

“We were talking about it on the way over here, how the United States is not even 250 years old, but how far back the Chinese culture stretches. It’s hard to fathom,” said Fehl.

“The level of athleticism and the talent and the skills,” were qualities of Shen Yun that Fehl would emphasize to encourage people to see the performance.

“I love to see what the human body can do and the ways that they’re able to use it with the dance is fantastic.”